This Halloween is going to be a special one for the fans of R&B/hip-hop lovers. Jeffery Lamar Williams, well-known as Young Thug is collaborating with Future and the Legendary R&B/hip-hop singer Chris Brown for the Tempo singer's recent album "Heartbreak on a Full Moon" which is to be released in the coming Halloween, October 31.

On the one hand, the American hip-hop artist is having a splendid career, but on the other hand, Young's personal life has gone through some hard times.

Young has surrounded himself with controversies following his relationship with now ex-fiancee Jerrika Karlae. After a series of social sites clash in between the ex-couple, the Gang Up singer wrote a threatening message for Jerrika.

Know the full story here in Frostsnow. Just stay with us.

Young who earlier was accused of being unfaithful with his long-term fiancee Jerrika, shared a snap of himself with the use of hashtag #single on October 4th. He captioned the picture,

Y cheat when u can creep..

Just his Instagram post was enough for his ex-fiancee to take a stand against him. Jerrika who engaged the singer/songwriter in May 2015, wrote a tweet in which she mentioned that she is back on the market,

I'm definitely back on the market tho ??

The tweet from Jerrika came as a wake-up call for the Relationship singer. Following the tweet, Young wrote a threatening message via his Twitter account. The singer tweeted, "What market?? Bitch u goin die OnGod,".

Young who is popular for his unconventional vocal style, fashion, and persona later deleted the tweet. 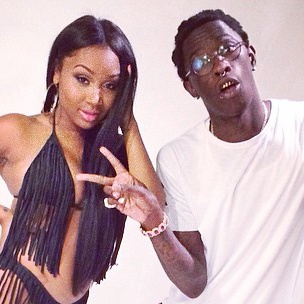 Despite such a threatening message from Young, Jerrika hasn't hit back on her ex-fiancee. The model instead seems have moved on in her life.

Well, after Young's relationship with Jerrika was over many of Young's fans are curious if he is now in a relationship.

The MTV Video Music Award winner had a bad fall after his breakup with fiancee Jerrika. The social sites feud in between the former couple just seemed to slow down, and now Young doesn't speak about his current relationship status.

We assume it's too early for the singer to get into any relationships. Well, guys what do you think, have your thoughts.