The wrestler-couple Sasha Banks and Sarath Ton is these days the center of attraction all because of their love affair and married life. Yes, they are married. Sasha and Sarath are officially husband and wife since 2016 and are living a happy married life.

Mercedes Ton is an American female professional wrestler who is currently signed to WWE on the Raw brand under the ring name Sasha Banks. Her husband, Sarath Ton, meanwhile, is a professional wrestler, widely known as Kid Mikaze and is a costume maker for the World Wrestling Entertainment.

Let's get inside their personal life and dig out all the details about their love affair and married life. Just stay with us.

The 26-year-old Sasha Banks and 35-year-old Sarath Ton were married in August 2016 and every since the pair is enjoying a happy marital relationship.

It's still a matter of question that exactly how and when the couple first met and started an affair but they are believed to have had their first encounter at WWE as both of them were linked with the company. The couple got married in a private wedding ceremony and both of them were pretty private about the event at the time. In fact, fans only found out their marriage because of a wedding picture that was posted online.

But the picture wasn’t shared by Sasha and Sarath as they were completely silent about the wedding on their social media pages.

Here's the post of their wedding, check it out:

A post shared by WrestlingNewsSource.com (@wrestlingnewssource) on Aug 5, 2016 at 10:35am PDT

The couple tied the knot in the same week when Lana and Rusev got married. Dozens of photos from the wedding were shared by WWE employees on social media whereas only a single photo from Sasha Banks’ wedding has ever been discovered. 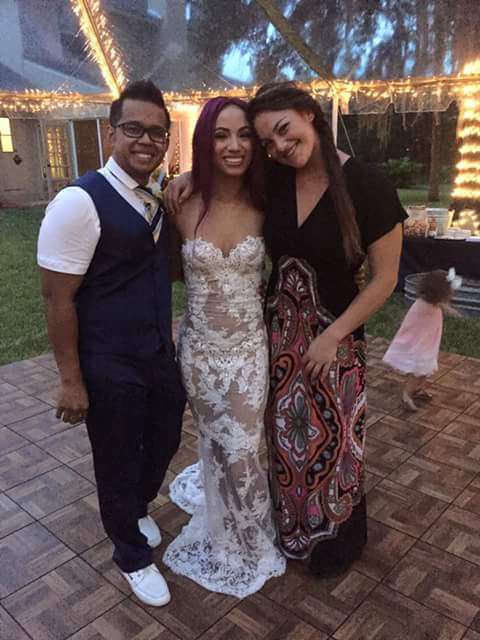 Since their marriage, the love and passion for each other are rapidly increasing every passing day. We don't see any divorce rumor, extramarital affair, not even a single controversy in their marital relationship. The couple usually goes on party, events, and vacations and they often share the moments they spent together through social networking sites.

Everyone help me by wishing @iammikaze a very Happy Birthday ??

We wish the pair all the very best for their future, and we hope they never have to face any difficulties in life.