The French duo Gabriella Papadakis and her partner Guillaume Cizeron who are two-time world champion were able to achieve the second spot in the 2018 Winter Olympics after Gabriella Papadakis suffered from the wardrobe malfunction at the early stage of their routine. The pair managed to continue their performance and made it to the end.

The 22-year-old ice skater mentioned that it was her worst nightmare at the Olympics and was proud that they delivered a great performance despite the accident.

And the duo was able to grab the silver medal with 81.93 points as the Canadian dance couple Tessa Virtue and Scott Moir captured the first place with 83.67 points and broke their own record.

It was a true bravery to deliver an outstanding routine and to stand in the second place even after the major accident the pair suffered from. Without the malfunction, they might have ended up in the first place as they were just less than two points behind the Canadians.

The French ice dance duo who have been together for long paired up back in 2003 when they were just 9 or 10 years old. Papadakis and her partner first performed at the ISU Junior Prix series in 2009. They were at the 15th place at the Prix and were 22nd in the 2010 World Junior Championship. 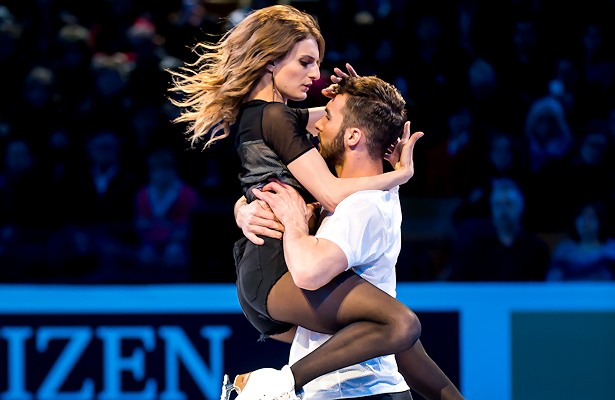 The pair were trained by Papadakis's mother ever since they teamed up. She coached them till June 2012, until they moved to Lyon and started to work with Muriel Zazoui, Romain Haguenauer, and Olivier Schoenfelder and achieved their first gold medal at JGP France as well JGP Austria with their personal best 142.08 points.

The year 2015 was one of the best years of their career as they were ranked first in the  European Championships in Stockholm with the margin of 8.45 points against the world champions Anna Cappellini and Luca Lanotte.

On the cover of the latest @ifsmagazine issue! Go check it out!

A post shared by Gabriella Papadakis (@gabriellapapadakis) on Aug 7, 2017 at 8:07am PDT

The same year in March, they won their first World Championship that was held in China and became the first French skaters to grab that title since 2008.

In 2016, Papadakis and Cizeron competed in the European Championship in Bratislava for the second time and were able to achieve their second European title as they got in first place in the free dance. They were also able to break the record of Meryl Davis and Charlie White at the 2014 Winter Olympics, setting the record of 194.46 crossing their own personal best.

The French duo holds four European Championship title. They received their third continental title at the event held in the Czech Republic in 20116-17 season and their fourth achievement was in the 2017-18 season after they won their first Grand Prix.