Frostsnow https://frostsnow.com/
Home Gossip Who is Petra Nemcova Dating After Break up With Laurent Lamothe? Past Relationship & Affairs

Who is Petra Nemcova Dating After Break up With Laurent Lamothe? Past Relationship & Affairs The gorgeous Czech TV star/model is one with a humble heart. The 38-year old Petra Nemcova who is the founder and the chairman of the charitable organization Happy Hearts Fund (established in 2005) has won millions of hearts with her social works, glamour, and looks.

Her ravishing look is one that is hard to resist.

A number of high profiles celeb has fallen for her charm. Petra who has been engaged twice last dated the Haitian Prime Minister of  Laurent Lamothe. After the high-profile break-up with Laurent, Is the model/TV star dating anyone?

In the year 2014, Petra became the talk of the town as she enjoyed her high-profile affair with the Haitian Prime Minister Laurent, but they broke up after few months of relationship in 2015. People confirmed the news of couple's relationship. 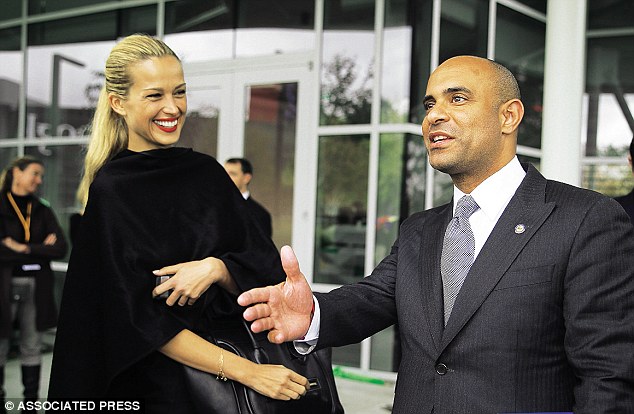 After her breakup with Laurent in 2015, she went low-key in regards to her love life. Ever since Petra's relationship status has become the matter of curiosity for millions of her fans.

So is she currently in a relationship?

Obviously, it is hard for one to move on after a failure in love and the same seems to be the case with Petra. She hasn't been lately linked with any names and neither she has been rumored to be dating anyone recently.

It looks like she is enjoying her time with her family and friends. Besides, she is also currently active in the social works with Happy Hearts Funds. In July 2017, Petra visited the city of temples Kathmandu for a cause i.e. to help the people who were affected by the natural disaster.

Recently on August 9, she shared a snap of her with some children from one of the schools in Kathmandu valley with the caption,

"Reunited with the Prithvi secondary school students in #Nepal. They are such a bright stars as they are getting private school quality of education in governmental school. #SoProudOfThem Thank you @Chopard
Rebuild by: @allhandsvolunteers & @happyheartsfund".

Reunited with the Prithivi secondary school students in #Nepal. They are such a bright stars as they are getting private school quality of education in governmental school. #SoProudOfThem Thank you @Chopard ?? Rebuild by: @allhandsvolunteers & @happyheartsfund

She indeed has a beautiful heart.

Looks like she is in no hurry to be in a relationship after the high-profile breakup with Laurent and two of her failed engagements.

Petra Nemcova and two of her Engagements

In 2004, Petra was engaged to the late Simon Atlee who died in the 2004 Asian Tsunami. The couple was out on a vacation in Thailand in 2004 when the disaster took place, luckily Petra survived the Tsunami.

All of it was like a nightmare for Petra as she nearly lost her life. Though she survived, she had to lose her fiancee in the Tsunami. In an interview with Daily Mail, Petra said,

Things happen in life for a purpose. You make a choice. You move forward and try and make your life better.

As she moved on in life, later in 2011 she found love with an English actor Jamie Belman. The same year the couple got engaged.

Petra and her boyfriend Jamie Belman got engaged in 2011

Despite the engagement, the couple called their relationship a quit in 2012. But as per the reports, the two are still good friends. In April 2012, a representative of Petra reported to The People

Petra Nemcova and Jamie Belman confirm their separation. They remain close friends and thank their families for their continued support during this time.

There will be no further comment on the matter.

Hope Petra will find a perfect partner for herself.