Who is Jon Rudnitsky Currently Dating? Details on His Affairs, Relationships, and Controversies The love life and affairs of celebrities have always attracted peoples. Likewise, the love life of the American actor Jon Rudnitsky, who recently appeared in a drama/romance movie Home Again alongside Lake Bell and Reese Witherspoon, has gained wide attention.

The former cast member of the NBC comedy series Saturday Night Live (2015-16) has kept his personal life merely up to himself. Majority of his fans barely know about love life and relationships.

Also, check this out:   Lake Bell Shows her Body After Baby Birth, Know about her Married life and Relationship with Scott.

Well, today we will try to know as much about his relationships and affairs.

Does Joh Rudnitsky have a Girlfriend?

Born in Harrington Park, New Jersey the former cast-member of the Saturday Night Live has influenced a lot.

With the impacts of famous personalities such as John Mayer, Martin Scorsese, Tom Cruise and Vladimir Putin, the 27-year old actor/comedian instantly publicised the show.

The actor is just 27, and there's a long way for him to go. Besides this, Jon is currently busy with his career, and his recent movie Home Again released on September 8.

Real excited for everyone to see @homeagainmovie out September 8!

Best of luck for his career. And hope he soon finds a lovely partner for himself.

Jon got into the controversies during the first year of his career in SNL. He reportedly did a mimicry of Anderson Cooper, an American journalist/TV personality, which eventually invited a lot of tension.

Back in 2014, when Seth Meyers the head writer of the Saturday Night Life did a spoof of Anderson, it was liked by Anderson,

Seth Meyers did a spoof of me years ago that was really funny and I’m all for being spoofed.

Also, check out a clip of the interview in between Seth Meyers and Anderson Cooper in the video below.

But the story with Jon was different. Anderson stated Jon's impression of him on October 17, 2015, was odd,

I didn’t think it was very good, it was like the only thing [Rudnitsky] knew about me was that I was gay so that’s sort of what he went with. I got a little Truman Capote vibe, which I thought was odd.

After Jon's offending impersonation of Copper, many people slammed the newcomer of SNL, Jon, through social sites, 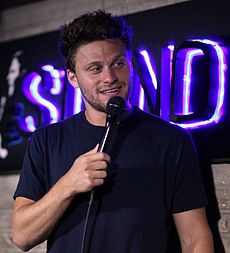 .@andersoncooper should get in a cab, go down to 30 Rock & punch that guy out. #SNL

I mean, seriously. Has he ever actually seen Anderson Cooper? Our even know who he is or what he looks like? #SNL

This dude is doing humanity's worst ever impersonation, of Anderson Cooper. #snl

Hope Jon doesn't repeat the similar mistake the next time!