Frostsnow https://frostsnow.com/
Home Gossip Who is Duane Lee Chapman II Married to? Know about his Married Life and Relationship

Who is Duane Lee Chapman II Married to? Know about his Married Life and Relationship

The former couple shares 4 children together. So who is he dating now? Let's know more about your favorite TV star Duane Lee Chapman II's married life, relationship, and children.

Nowadays, marriage is taken as the second option while the career is everybody's first priority. We have seen frequently, divorce is taken as the only solution for the problem in a relationship.

Duane Lee Chapman II and Teresa R Roybal tied the knot on December 1, 1999, and were together for almost 8 years, but their relationship ended which is, of course heartbreaking.

The beautiful couple divorced in 2008 and the reason behind the divorce is claimed to be Chapman's violent behavior while some sources tell that his wife Teresa cheated on him.

Reportedly, Teresa remarried just one month after the divorce was finalized.

Video: Duane Lee Chapman II with his wife and children

Duane Lee Chapman II and Teressa Roybal do not have their child together but are parents to 4 children.

Duane has a son Dylan Chapman from his previous relationship before their marriage, born on November 5, 1994.

Duane's first child Dylan Chapman is now 23 years old. Apart from him, they were the parents of three other children, Jody, Jasmine, and Jennifer, from Teresa's previous relationship.

Duane Lee Chapman II has been in two celebrity relationships which lasted for 4 years in total while his only marriage with Teresa R Roybal lasted for 8 years.

He dated Michelle Riddle from Florida. Apart from that Duane Jr was in a serious relationship for a few years with a television producer and casting director, Ana Cordova. However, in the end, the relationship dissolved.

It is reportedly said that Duane Lee Chapman is single at the moment and no reports of his girlfriend or dating are out. It's amazing how he didn't take his father's footstep of marrying a long list of women.

The 6'1 TV Personality Duane Lee Chapman II first got recognized by the entertainment industry from his performance at an American television series Dog the Bounty Hunter along with his father Duane Lee Chapman which aired on A&E. 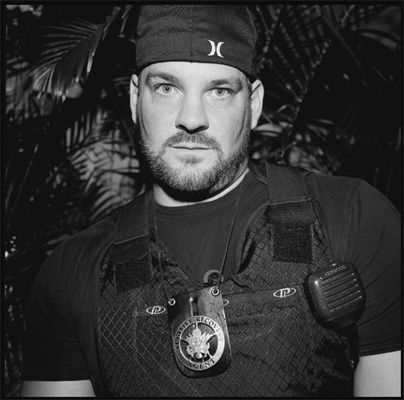 But A&E canceled the series after eight seasons. The series Dog the Bounty Hunter was full of the members of Chapman Jrs. house.

His renowned father and his cousins were also the part of this series. He actively played in the series from season 2 to season 8. Duane Lee Chapman also released his autobiography, You Can Run, But You Can't Hide which became number one on the New York Times bestseller list. The book is currently at a price of $17.97 for its hardcover edition.

Who is the ex-wife of Duane Lee Chapman II?

When did they get married?

When did they get divorced?

Duane Lee Chapman II and Teresa R Roybal divorced each other in the year 2008, after 8 years of married life.