Kate Marie Nash a.k.a. Kate Nash is an English born singer, musician, actress, and songwriter. She is widely recognized in the UK for the song Foundations which she sang and co-wrote. The song was released in 2007 and gained a lot of fame despite very low promotion. Moreover, her debut album Made of Bricks was a great hit and ranked No. 1 in the UK. As an actress, she is best known for the portrayal of Rhonda Richardson on Netflix series GLOW featuring Alison Brie, Betty Gilpin, Marc Maron, and many others.

Born on 6th July 1987, the 30-year-old is a proud owner of a BRIT Award for Best Female Artist. She was previously in a relationship with the guitarist and vocalist of The Cribs, Ryan Janes Jarman. They dated back in 2007 but, they broke up in 2012. Continue reading to know more about her relationship with her ex-boyfriend Ryan Jarman and her current mystery man.

Kate started dating vocalist and guitarist Ryan Jarman back in 2008. The duo was in a very intimate relationship, and they made public appearances frequently and were there for each other all the time. Back in 2010, the vocalist even called out English rapper Pro Green on Twitter after he found out that the rapper was trying to hook up with his girlfriend. He claimed that Green was organizing meetings with his girl through respective managers of the tour. Moreover, he even stated via. Twitter that Green was 'arrogant' and a 'prick.'

However, the other side of the story was completely different; someone came up to a camp where Kate was performing and shared that Green had a crush on the singer. He soon found out that she had a boyfriend who was also present with her on the day, Green was over her. 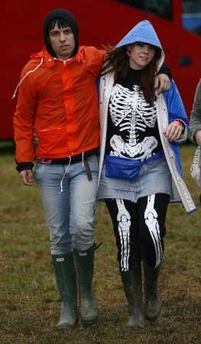 Furthermore, Green staying professional used Twitter to reply to Ryan. However, since then, the Twitter posts have been deleted.

Moving on, the couple broke up two years after the incident on 19th March 2012. They were together for four years, but they decided to move on in their paths.

If you are a big fan of Kate and follow her religiously on her Instagram, you are already aware of this but if you are not, Kate is in a relationship with a man, and he is not someone from the film or glamor industry.

Watch Kate in Trailer for GLOW

Throughout the years, Kate has been sharing some lovely pictures of herself with the man on her Instagram. Not long ago, she uploaded a photo of herself with her dog Stella and the man laying on their bed. She captioned the picture with three hearts and holiday snaps.

There are many pictures of Kate spending some good time with Thomas on her Instagram. We are unsure if they are exclusive, but they sure seem to enjoy their company, and it seems Kate just can't stop sharing him with her fans.