Frostsnow https://frostsnow.com/
Home Gossip Who Is American Actress Daniella Alonso Married To? Know About Her Past Affairs & Children

Who Is American Actress Daniella Alonso Married To? Know About Her Past Affairs & Children

The 40-year-old American born actress Daniella Alonso is a fashion model as well. Alonso has appeared on the shows like Revolution, Friday Night Lights and has acted as the lead in movies such as The Hills Have Eyes 2 and Wrong Turn 2: Dead End.

Since 2013 the beautiful actress is married to husband Austin Henning. The actress having an estimated net worth of around $2 million doesn't have any children at the present.

Check us out on @hollywoodtodaylive today! ?? where we talk about tonight's episode of @animalkingdomtnt on @tntdrama 9/8c!!

Daniella is known to be a very secretive person. She only prefers sharing details of her personal life to intimate groups only. To know more about Alonso personal and professional life, continue to read below.

The talented actress has stolen hearts of countless fans through her graceful beauty and acting skills. Even so, Daniella is not reported to have any boyfriends in the past neither there are rumors of her being involved in any affairs.

Little is known about her personal life. We just know that she got married to husband Austin Henning in the year 2013, but the exact date hasn't been specified. The details of the wedding haven't been disclosed either. Knowing how private Daniella is, the ceremony must also have been a private event in presence of their close friends and family members.

The husband and wife don't have any children right now. Seeing Daniella loving and taking care of her pet dogs so much like her own children, we can guess she would be a great mother.

The talented actress has been participating in Karate and tae-kwon-do since her early school days and has the fourth level green belt.

During her early teenage, the charming Daniella's talent was noticed by the Ford Modeling Agency and she was offered jobs as a model for teen magazines like Seventeen, YM, and Teen. Later on, she started appearing on commercials for Clairol, Cover girl, Clean and Clear, Kmart, Target, Footlocker, Volkswagen, and others. 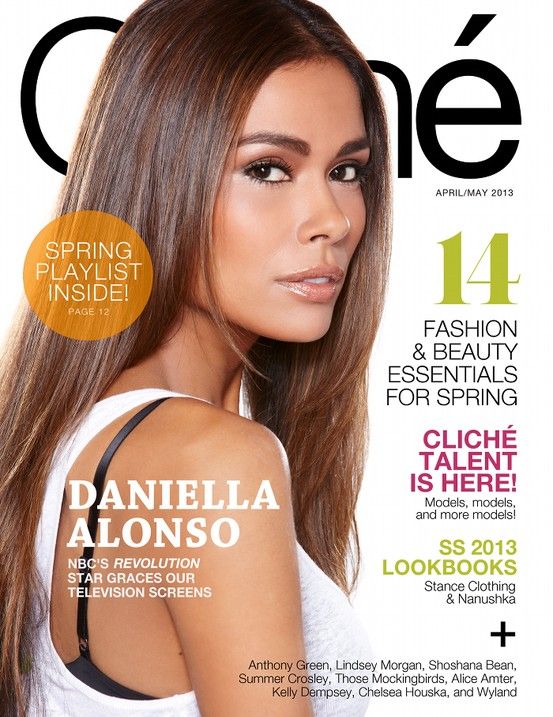 Daniella Alonso in the cover of Cliché Magazine

In 1997, she starred in her first movie Academy Boyz as Lisa. Ever since, she has acted on dozens of movies such as Lawless Range, Paul Blart: Mall Cop 2 and The Collector with co-actors like Josh Stewart, Andrea Roth, Juan Fernández and many others.

The actress has also appeared in numbers of television series. Her first role in television series was in Law & Order: Criminal Intent in 2001. Daniella became a popular name in the industry through the role of Anna Taggaro in One Tree Hill. After the success of The Night Shift in 2014 as Dr. Landry de la Cruz, she was cast on BET's Being Mary Jane as Marisol in recurring roles.

In 2018, we will be seeing Daniella's performance on shows SEAL Team and Criminal Minds. Hope her latest show will bring her more success and popularity. We also hope that her marriage with husband Austin Henning will last forever, and she will soon enter motherhood.

The husband and wife don't have any children right now. But, we would like to see their children in future.