Believe it or not, but Vine star Curtis Lepore can earn a four-figure salary with a six-second stint of comic videos. Curtis Lepore was born on June 28, 1983, with an Italian family background. He is an American actor, musician, and internet celebrity. Since 2013, he has been one of the top 5 most followed Vine stars continuously.

Apart from Vine, he is famed on other social sites too. He has 905k followers on Twitter and 3.9 million on Instagram.

Let's find out about his net worth and sources of income.

Curtis Lepore Net Worth and Sources of Income

Curtis hit to fame and success with Vine. Vine, the six-second video sharing site owned by Twitter, doesn't have any traditional advertising. Lepore was one of the first users to get an endorsement. He had gotten sponsorships from clients like Virgin Mobile, Aquafina and Jolly Rancher.

Back in 2014, Lepore told that he can make $1,000 for re-Vining someone's video, similar to retweets on Twitter, and $8,000 through product placement in a six-second clip of his own. Lepore also was one of the first clients of the Vine talent agency, Grape Story. From 2009 to 2012, Lepore was the frontman of the straight edge hardcore band, GHOSTxSHIP. He had helped found this band in his hometown of Syracuse, New York. After leaving the band in 2012, Lepore also provided guest vocals on a record for rock band No Zodiac.

Many of his Vine videos involve collaborations with other Vine stars such as Lele Pons, Christian DelGrosso, KingBach, and so on.

With his handsome earning, he has had several properties in his name and has a significant net worth is around $5 million.

In 2013, Lepore was part of one of the first online celebrity couples with his relationship to Vine co-star Jessi Vazquez known as Jessi Smiles. At the time, Lepore had over 1 million Vine followers. After being accused of rape by his then-girlfriend, his following had subsequently decreased.

In October 2013, Lepore was alleged to have raped his then-girlfriend, Vazquez. Vazquez stated that Lepore raped her while she was asleep. Charges were filed in January 2014. Lepore had pleaded not guilty to the charge. In February 2014, Lepore took a plea deal in the case; the rape charges were dropped and he pleaded guilty to felony assault.

Curtis plead guilty to a felony assault today in court. It is no longer going to trial. I am okay with this and thankful for it to be over. 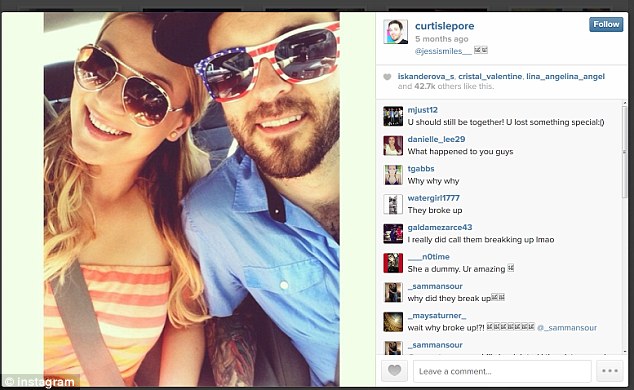 In February 2015, Lepore's felony assault charges were reduced to a misdemeanor.

The rape charge against me has been dismissed! http://t.co/LctfhzZI9B

But after all this, he came back to being the Vine superstar. As of July 2016, Lepore has 9.4 million followers on Vine.

Lepore was raised in Smithtown, New York, and is a vegan. He has a Boston Terrier named Buster Beans whom he adopted in 2010 from an elderly couple who could no longer care for him. Lepore is actively involved in a variety of national and local charitable organizations, such as Stuff-A-Truck, a project which focuses on donating toys to underprivileged children.