If you are a ‘Teen Mom’ viewer, you surely know about the second season’s star Jenelle Evans. Gorgeous Evans is all set to start up her new family with her newly born baby girl Ensley Jolie Eason and her boyfriend-turned-fiance David Eason. Yes, you read it right, Eason and Jenelle finally got engaged and they chose their Instagram to reveal the great news.

On 11th February 2017, Evans posted a very adorable photo of herself and her new fiancé on her Instagram with a caption "We've decided on forever! #PerfectTiming." On the photo, Eason was seen planting a very warm kiss on the back of Evans’ head while she kept a cozy smile and showed off her gorgeous engagement ring.

Honestly, Evans’ engagement ring is praiseworthy as it consists of an oval shaped diamond and its radiance makes us hard to take out eyes off.

Eason appears to be a very romantic guy as the pair is seen holding a bunch of red roses. We must admit that the proposal must have been dreamy as the pair seems to be somewhere outdoor amidst a gorgeous landscape.

It seems like the arrival of baby Ensley on Evans and Eason’s life turned out to be lucky for the pair as they got engaged within few weeks of her birth. Despite the fact that, Ensley is Eason’s third child, but she is Eason’s first. Besides Ensley, Evans is the  mother of Jace, whom she was pregnant with during the MTV’s 16 and pregnant. Her second son Kaiser was born due to her relationship with ex-fiance Nathan Griffith. 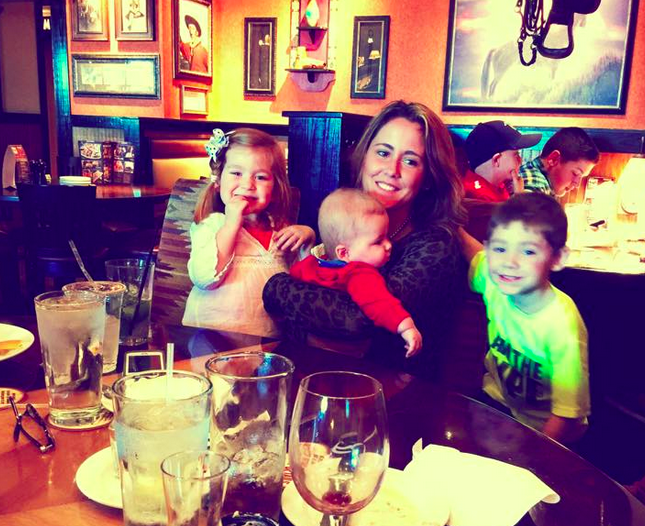 Image: Jenelle Evans with her kids

Evans was previously married to Courtland Rogers. The pair’s love affair turned into a wedding really soon as they dated for 3 months and tied the knot in 2012. However, things didn’t work out between Rogers and Evans to an extent that’s he even filed assault charges against him after 6 weeks of their marriage. They lived separately for quite a time before they got divorced in June 2014.

Evans’ relationship with her current fiancé Eason is going pretty well. Despite the fact that she received negative comments on her social networking because of her failed past relationship, she cared less about it.

Evans who seems very happy about her new beginning hasn’t revealed any wedding plans yet, but we hope she does that really soon.