Todd Chrisley close to signing $75M production deal, Know about his Net worth and Career

Is there any shortcut to money? You are sure to find a single answer to this question, Hard Work. And today we are talking about the self-fortuned person who is none other than Todd Chrisley. 49-year-old Chrisley also a real estate developer is best known for his appearance in the American reality series Chrisley Knows Best.

Married twice in his life, Todd is currently living with his second wife Julie Chrisley since May 25, 1996, and is the father of 5 children. The owner of Chrisley & Company (CAM) is currently estimated to have an estimated net worth of $5 million, amid of his possible $75 million deal.

Every morning I wake up, I go straight to the kitchen to make my #310shake?? It's so easy to make, especially when I have a full schedule ahead of me, I can always count on my shake to keep my fueled! @310nutrition has low calories, sugar free, soy free, egg free, gluten free, and tastes delicious! Use code "310perform" for FREE shipping at checkout.  #healthylifestyle #cleaneating #fit #ad

This businessman built his empire starting with the scraps, and it's no wonder we want to know how much he is paid up for his efforts. Let's get more info on the businessman's wealthy life and the reported multi-year deal here in Frsotsnow.

Born and raised in Georgia, South Carolina Todd Chrisley, 49, lived in a simple, small-town life. He doesn't have any higher educational certificate.

But if you have a vision and hard work with you, you are obvious to make it to the top, and Chrisley proved it. Previously married to Teressa Terry until their divorce in 1996, Chrisley made his fortune by owning several ventures, starting with Executive Asset Management LLC, which operated from 2004 to 2008.

Later Chrisley again rose to fame after he founded CAM, a real estate owned management company headquartered in Atlanta, but reports conflict as to when CAM was established, with dates mentioned variously as 2007, 2008 and 2009.

CAM's operation became so difficult after the housing market collapsed in 2008 and he went bankrupt. Even as CAM was filling for bankruptcy, Chrisley started a television program, Chrisley Knows Best to showcase the life of his family, a lavishly living Southern family. 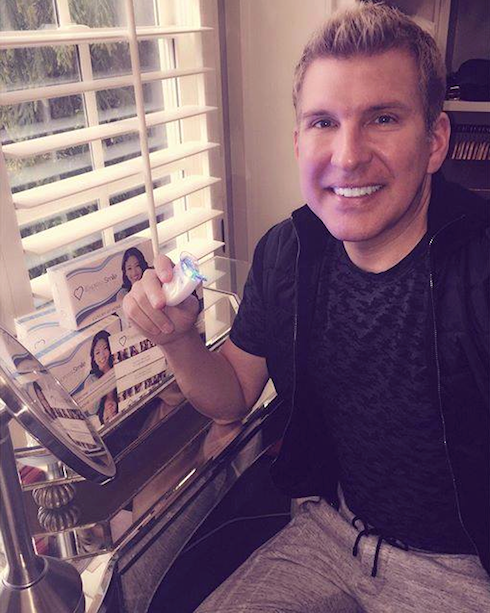 Premiered in 2014, the reality TV showed the family's journey from various trials and tribulations; Todd appears as a tough and strict father who keeps his family in line and manages the family like his job.

Even after failing many times, he didn't give up. What could be said bad luck or inexperience, but he never gave up and that's the best thing about this man.

Check out the double life of Todd Chrisley in a video below.

Todd gathered massive media speculation from the show which became the top searched Google topic on the day of its premiere.

Along with his own TV reality show, the businessman had also appeared on the American talk show The View in 1997 and reality television reality series Steve Harvey in 2002.

He pulled his way through lots of obstacles and is still going strong. So all and all how much has he made so far with his commercial career and TV shows?

The star of Chrisley Knows Best made highlights in the mid-2017 as he was about to check in his brand name in the bank soon. A strong source told US Weekly that the reality star is close to signing a multi-year deal with several shows, but the company's name isn't yet revealed.

The deal will be of worth $75 million and if everything goes in a right way the reality star is sure to make it big. Though, the news of the million dollars showering deal is not finalized yet. Probably, the future awaits to share the biggest day for Todd Chrisley.

Todd Chrisley's Net Worth and Lifestyle

Todd Chrisley, who is quite secretive about his net worth and earnings is a millionaire according to the story at CelebrityNetWorth.com. He earns his fortune from his business and the TV reality show and at one time his company was worth $8 million.

He doesn't admit to being a millionaire but what can be said when he lives in projects and owes mansion worth a thousand dollars and lives a lavishing life.

Chrisley owned a 30,000 square foot Rosewell house in Georgia worth $2.4 million which features a gourmet indoor kitchen along with an outdoor one, a living room, a theater, a spa bathroom, and saltwater pool.

But now the house is foreclosed because the businessman couldn't make the necessary payments. Chrisley owned a 30,000 square foot Rosewell house in Georgia of worth $2.4 million and has got a gourmet indoor kitchen along with an outdoor one, a living room, a theater, a spa bathroom, and saltwater pool.

Currently, he owns a 1750 square foot condo with two bedrooms and two baths worth $300,000 in Atlanta, Georgia his hometown.

On his up and down lifestyle CelebrityNetWorth.com stated that;

Chrisley Asset Management, a firm that, according to court documents, has been struggling for a number of years, even as Mr.Chrisley and family continue to live a very lavish lifestyle, including owning a 300,000 square foot mansion and spending $300 thousand dollars per year on clothes.

As reported Chrisley is linked with $75 million production deal and it is sure to contribute a lot to his net worth.

How Much Does Todd Chrisley Make With TV Shows?

Though information on how much Todd makes per episode of his TV shows is unavailable, it is evident that it's below $5 million based on his negative $5 million net worth.

Also, have a look at Chrisley's most famous quotes which were his base for his success.

Most Influential Quotes from Todd Chrisley

Chrisley is strict on rule person in the office and as well as at home. He seeks nearly flawless performance at all of the easy or hard times.

Perfect is something you should strive to be.

Clear with his vision, Chrisley likes doing the thing that makes him happy and is satisfied with life.

Despite his conflicted net worth, there's no doubt to the fact Chrisley made it all from the ground with a humble beginning.