Are you fond of tattoos? Want to know about the lifestyle and career story of a tattoo artist? We have Katherine von Drachenberg for you. Her personal life has always been in headlines. Let's have a look why is it so?

Best known as Kat Von D, she is an American born tattoo artist, model, entrepreneur, television personality, and musician. TLC reality television's tattoo artist, Kat was once married to her fellow tattoo artist Oliver Peck but this marriage ended in a sad divorce.

Later, Kat was involved in a love relationship with the Canadian-British-American stunt performer, comedian, Steve-O. This relationship also couldn't last forever as they also parted ways. Curious about the reason behind the couple's break-up? Hold your breath, today we are going to provide you with all the details.

Kat and Oliver were college mates and it was not always a love relationship between them. They fell for each other only after they started working together in 2002.

At a loss for words every time @llewellyn draws me. ?

The couple started dating each other for a year. In the fall of 2003, Kat and her fellow tattoo artist, Oliver got married in a church. For everything in life, there is a beginning and there is an end, and there came a time when they had to end their relationship. Sad thing.

As a happily married couple, they spent their married life until 2007, but things didn't work out between the couple. 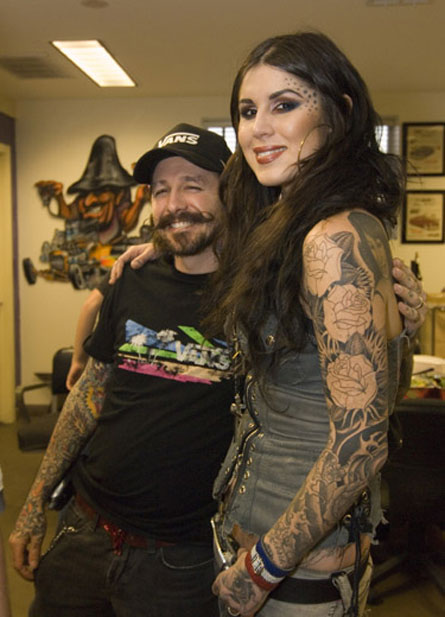 In August of 2007, the couple decided to separate and they filed for the divorce. Their divorce was finalized later in the same year.

The star of LA Ink, Kat subsequently acquired her own TLC series, LA Ink. On the show, she achieved the Guinness World Record for most tattoos done by a single person in 24 hours, 400! in December 2007.

It involved a Von D-designed logo for the city of Los Angeles. Her record was subsequently broken by her ex-husband, Oliver Peck on June 13, 2008, with 415 tattoos. For the information, this is not a Guinness World Record now. After Kat's divorce with Oliver she dated few other men and among them, she got engaged to two of them. They were motorcycle customizer, West Coast Choppers CEO and reality TV personality Jesse James and Canadian music producer Joel Zimmerman/Deadmau5.

Kat Von D and Steve-O were in a love relationship

Thank you @steveo, for taking this super cool photo of my shoes! ???? pic.twitter.com/CzpuBOUxve

Kat's married relationship with Oliver and both of her engagement did not work out well. After this, she started dating Steve-O, who is a stunt performer, comedian, the animal-rights activist, and television personality. Their relationship started in 2015 as both of them has a mutual love for animals and tattoos. Did this relationship last?

Well, Not exactly. Even though Kat and Steve seemed so head over heels in love, the pair separated after almost one year of a romantic relationship.

Kat Von D hasn't had that kind of great relationships with her boyfriends, but who have seen the future. We hope this gorgeously talented beauty all the luck and hope that she gets her Mr. Perfect soon. Richard Trethewey's Married Life Still A Question mark, Who Is His Wife? Also Know his Affairs Michael Urie Rumored to be Gay, Who is he dating currently? Know about his Relationship