76-year-old Stephen Hawking is an English theoretical physicist, cosmologist, and author whose birthdate coincided with the 300th death anniversary of great scientist Galileo. The honorary fellow of the Royal Society of Arts (FRSA) is the author of the bestselling book A Brief History of Time.

The life of the world's smartest man has been presented in his biopic The Theory of Everything starred by actor Eddie Redmayne. The popular scientist has an estimated net worth of around $20 million as of 2018.

Watch the trailer for the movie The Theory of Everything

The leading theoretical physicist is suffering from a slow-progressing form of amyotrophic lateral sclerosis (ALS) which has paralyzed his entire body except for the single cheek muscle that he uses to communicate via a speech-generating device.

Hawking's net worth of millions of dollars is estimated on the basis of the property and vehicles under his name, his career earnings, books sold and also his charity works. Information about his entire career, net worth and his achievements have been given below.

Net worth of Stephen Hawking

As mentioned earlier, the physicist is worth $20 million. He is the ninth-richest scientist in the world according to the list created by SuccessStory.

During the early 70’s, Dr. Hawking lived in house No.6 in, across the road from Little St Mary’s Church. However, with his condition worsening, he moved to Number 5 West Road along with his family.?

The post of the director of research in the Centre for Theoretical Cosmology at the University of Cambridge grants him a decent but not huge paycheck as his yearly salary. The millionaire scientist pays his assistant thousands of dollars. On December 29, 2011, BBC had published a news that wrote: "Professor Stephen Hawking is advertising for an assistant on a salary of around £25,000 a year".

In 2012, Stephen was awarded the Fundamental Physics Prize established by Russian billionaire Yuri Milner’s Breakthrough Foundation along with $3 million cash.

The scientist is also the author of tons of books. The book titled A Brief History of Time was on the British Sunday Times best-seller list, about 9 million copies of the book was sold. His Ph.D. thesis in applied mathematics and theoretical physics is are available on Amazon for $85.

Stephen, other than being a scientist, is also an actor and a presenter. He has made guest appearances on the popular show such as The Big Bang Theory and as well as starred in many of the films based on his books.

In 2016, Stephen appeared on the Jaguar's "British Villains" campaign, a global ad promoting Jaguar's first SUV, the F-PACE which was recreated by Spark 44 with the theme "British Intelligence".

He makes lots of appearances on television talk shows and interviews and travels various places to receive awards. For the obvious reasons related to his disability, he mostly prefers international travel via private jet.

Career and Achievements of Stephen Hawking

Professor Stephen Hawking has devoted his entire life to science. After being diagnosed with fatal motor neuron disease he was able to pull himself up from depression and despite the vocal disability, he obtained his Ph.D. degree in 1966.

In the same year, he expanded his Ph.D. thesis on singularity theorem with Robert  Penrose. Four years later he hypothesized the second law of black hole dynamics and later on postulated the four laws of black hole mechanics with  James M. Bardeen and Brandon Carter.

In 1973, Hawking published his first book The Large Scale Structure of Space-Time, written with George Ellis. In 1974, he became the youngest scientist to become a Fellow of the Royal Society (FRS) after his discovery of Hawking radiation.

In 1982 he started working on a popular book about the universe called A Brief History of Time which was published in 1988 by Bantam Books. The book played a vital role in establishing Hawking as a celebrity. The film version of the book, directed by  Errol Morris, was premiered in 1992.

Hawking pursued his research in physics and wrote several articles on black holes and the Big Bang. In 1993, he published a collection consisting all his articles, essays titled Black Holes and Baby Universes and Other Essays.

As a professor at Cambridge University, he supervised 39 successful Ph.D. students before retiring as Lucasian Professor of Mathematics in 2009 but he still continues to work as the director of research for the university.

I am now the Lucasian professor of mathematics at Cambridge.. once a position held by Sir Isaac Newton in 1663.

Hawking has been awarded several prestigious awards such as Adams Prize, which he won in 1996; Lilienfeld Prize, in 1999; and BBVA Foundation Frontiers of Knowledge Award in 2015. But he is yet to receive a Nobel Prize.

The scientist, who was given just a few years after the diagnosis of amyotrophic lateral sclerosis at age of 21, has proved the doctor's prediction wrong. Despite the paralysis, he has been able to live his life happily.  He has been married twice with Jane Wilde in 1965 and Elaine Mason in 1995 and has three children. At the age of 65, he experienced his first zero-gravity and did backflips on air. 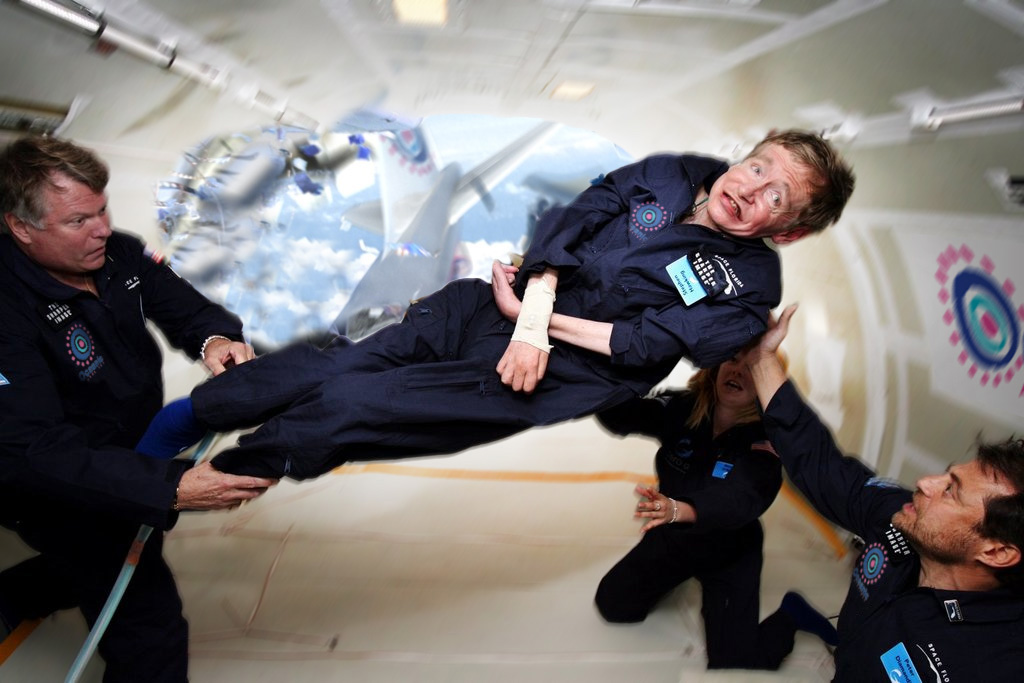 Hope Stephen Hawking will live many years more, he can fulfill his goal to travel into space. We also hope he will soon be awarded the Nobel prize for his aspiring work in science.