Frostsnow https://frostsnow.com/
Home Gossip Stephanie March is Married to Husband Dan Benton After Her Divorce With Bobby Flay; Are They Happy? Actress Stephanie March was previously married to Bobby Flay for about a decade. However, their marriage eventually ended in a divorce. Well, it wasn’t very long after her divorce, she married again.

To know more about Stephanie March and her current husband, Dan Benton’s, relationship, Read the article:

Law & Order: SVU Actress Stephanie March got married her boyfriend, Dan Benton on 1st September 2017. Tech Investor Dan Benton and Stephanie married each other at their house in Katonah, New York among their family members and close friends.

The 43-year-old actress Stephanie first met Dan just a few months after Stephanie’s divorce with her ex-husband, celebrity chef Bobby Flay. The duo met each other through a mutual friend.

This year for Halloween we will be The Honeymooners. #lastnight #happyhalloween

They met for cocktails at the West Village bar Orient Express and had dinner afterward. But their first real date was a TED Talk after which they talked for four hours. Dan adores her and supports her.

He was by her side when she has received the 2016 Board of Governor’s Award from the World of Children, a non-profit devoted to improving the lives of children.

Dan proposed Stephanie on her 43rd Birthday on 24th July during their holiday in Greece.

Stephanie as a bride wore Dolce & Gabbana for her wedding. Her love for the Star Wars made her walk down the aisle to the Star Wars theme song. The song was played on her grandmother’s piano. The ceremony was followed by an outdoor luncheon. 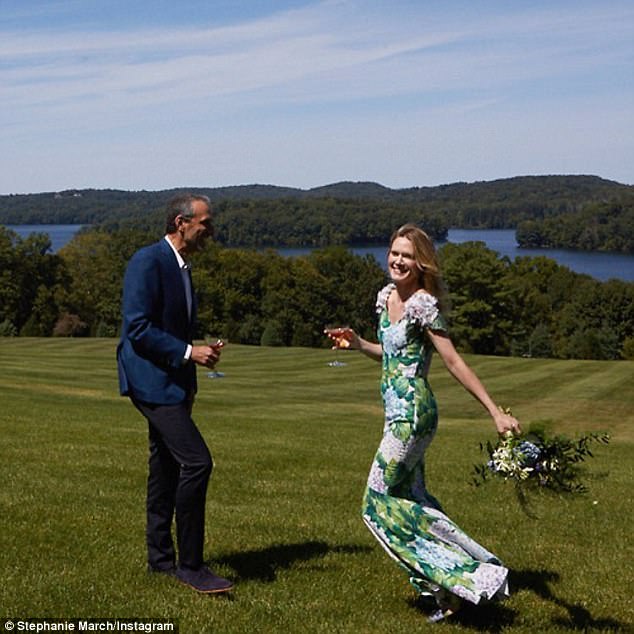 Rebecca Perkins, a good friend of Stephanie March and also the co-founder of Rogue Makeup Salons in New York City, said that she has never seen Stephanie so happy before that day. Rebecca even did Stephanie’s makeup for the event. She also did the makeup of Stephanie’s sister and her mother. Rebecca also added that Stephanie and Dan had a picture-perfect ceremony among their close friends and family. The people attending the ceremony loved, supported, and adored them. She had a wedding like a dream which was designed with amazing floral arrangements.

To know more about Stephanie March and Dan Benton's relationship together.

After her unsuccessful marriage with Bobby, Stephanie March is finally happily married to her new husband, Dan Benton. We wish the newly-wed couple all the luck in their marital life. American Actor Jay Hernandez's Married Life With Wife Daniella Deutscher, Do They Have Children Together?