Ji Suk-Jin is a well-known South Korean comedian who has also worked as a television presenter, actor, and broadcaster. Ji is best known as a cast member in the variety show Running Man where he is working with Yoo Jae-Suk, Kim Jong-kook, Gary, Haha, Song Ji-Hyo, and Lee Kwang-Soo. The 50-year-old Ji is a Gangwon born actor who has completed a bachelor's degree in Business Administration from Ajou University.

Turning to the personal life of Ji, he is a married man who has been married to his wife Ryu Su-Jung for a long time. The married couple is also blessed with a son named Jee Hyun-Woo.

To know more about Ji's married life and his relation with his wife and his son, stay with us.

There is a very interesting scenario in the love proposal of Ji to his wife Ryu. His friend Yoo Jae Suk introduced him to his wife where Ji instantly told her that he fell in love with her. Later, they got married and are still in a very good relation. It was 2006 when he said that his wife was pretty shy and he also said proudly that his wife got some celebrity offers but, due to her shyness she refused the offer.

The couple has got a very handsome son, Jee Hyun and he was first revealed to the media with his mother by Ji for the first time in 2013 December. It was December 20, when he appeared on MBC's variety show "Real Animal Adoption: Our Family's Youngest" together with his wife and son. His wife Ryu was looking pretty beautiful and that made the viewers difficult to believe she is a mom. 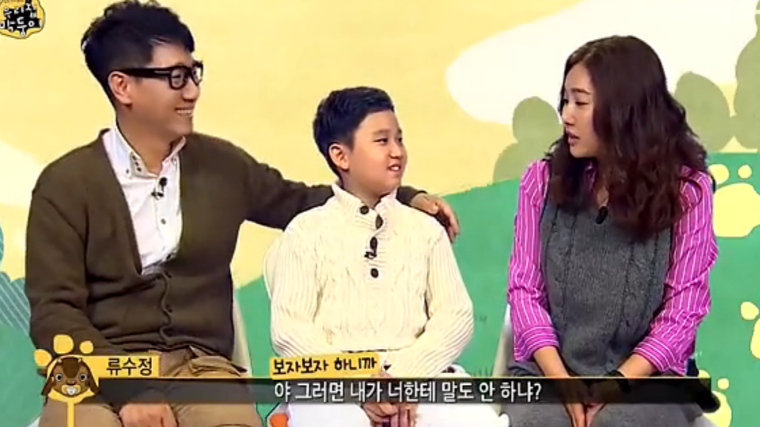 Caption: Ji Suk with his wife Ryu and son Jee

On 22nd January 2017, Ji and his wife Ryu were serving up major couple goals in the 335th episode of the variety show Running Man. The episode was entitled as "Big Nose' Week" where the big nose might be indicating to Ji because Ji has a nickname "Big Nose Hyung" which he got from the same show.

Ryu read out a letter there which she had written especially for the ceremony and Ji was holding back his tears when Ryu said,

"To my loving husband, It has already been 20 years since I met you as a young and immature 24-year-old, and you went my 'Oppa' to Hyun Woo's dad after I gave birth to Hyun Woo."

SBS' famous variety show Running Man was about to cancel the program but, it has reversed its decision after the fans of the show expressed their regret on the cancellation of the show.

What do you guys think about the couple? Please, leave your opinions in the comment box below.