Soo Joo Park is enjoying being Bachelorette? Also, Know about her Career

The South Korean model, Soo Joo Park is famous for Joy Model Management, Esteem models. The hot and beautiful model is a first Asian-American to become a brand ambassador of L'Oreal Paris.

The 29-year-old Korean model, Park is rising as the prominent model as she is one of Model.com's Top 50 models. She has recently walked for Chanel and Moschino during Paris Fashion Week and appeared in two Vogue editorials.

Well, there is no doubt that she is a complete package of beauty with a brain but what we want to know is what she's like behind her modeling path. Does she have a boyfriend? It's time to find that out!

The Korean-born beauty, who is famous for her platinum hair, has remained discreet about her private life and affairs. Being globally renowned, the hot and fresh model is far away from the spotlight when it comes to her dating life and relationship.

She hasn't been linked with any of her co-workers and is not spotted with any handsome hunks till now, which makes us wonder how is that even possible as she is so hot.

Well, it seems that she is a reserved person and likes to keep her personal life away from the noisy media and just focus on her career for now, before settling down.

Maybe she is waiting for her Mr. Right! If it is so, then it's good news for all her fans. Goodluck People, you may have a chance to make her your girlfriend.

You guys know or not, but this talented supermodel has been featured in a short film named, Impossible Love, in 2014, which was produced by Vs. Magazine. Now, let's take a quick look at her modeling career. Stay with us!

The talented Korean model is best known for her unique style and her platinum blonde hair that helped her to boost her career.

Originally hailing from South Korea and raised in California, Park studied architecture at the University of California at Berkeley and then moved to New York to pursue her modeling career.

The 29-year-old Park first appeared in an ad campaign for BCBG Max Azria, and she was in an editorial for Paper Planes Magazine in 2010. Then she was caught by an eye of Carine Roitfeld, a fashion editor, who saw her potential and shot Park for her namesake publication, CR Fashion Book.

The supermodel then didn't need to turn back. She was introduced to designers Karl Lagerfeld and Tom Ford whom Park has continued to work with on the runway and in respective campaigns.

Park has also walked for the likes of Fendi, Zac Posen, Max Mara, Just Cavalli, Vivienne Westwood, Hood by Air, Jeremy Scott, and Moschino. She also graced the covers for some prolific titles including Vogue Korea, Wonderland, and Numero as well as featuring in Harper's Bazaar, V, Intrerview, Vogue Japan. 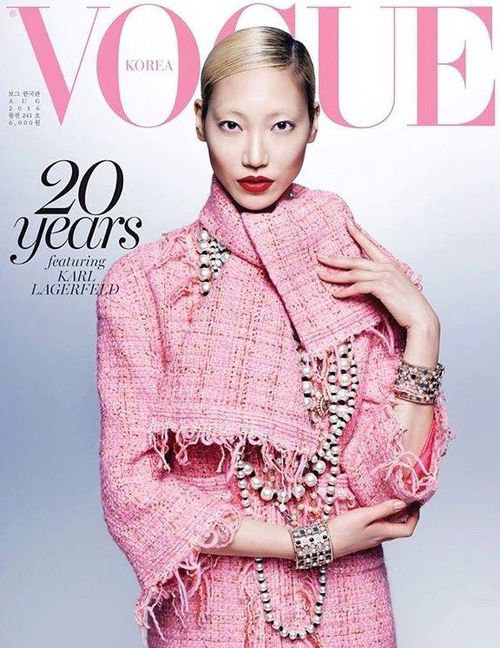 Soo Joo Park in the cover of Vogue

With her eclectic looks and charming personality, she is already on the covers of Wild Magazine, The Hunger Magazine, Glass Magazine and Vs Magazine. Most recently in 2015, she was in ad campaigns for Redken, DKNY, L'Oreal and has walked for Chanel, Moschino, Fausto Puglisi and Max Mara.

We all know, Park is an outstanding model who has already marked her name in the list of Top 50 models. But besides her modeling career, she is also an impressive actress, where we can see her acting skills in a short film, "Impossible Love."

However, this is not the first time Park has shown her creative muscles. The multi talented model is also a photographer and artist. Hats off to this multi-talented supermodel.

Grateful for this opportunity to speak at the ROCKEFELLER CENTER on behalf of @lorealusa at @melanomarealli #LFFM!!! Everyone please get your skin checked and use SPF (for those with sunscreen allergy like myself, try SPF with zinc oxide or titanium dioxide)  @lorealskin #worthit #melanomaawareness

Her hard work and dedication towards her career are an inspiration for all the new comer models. We wish more success for her upcoming days.