Singer Jordyn Taylor and Comedian Trevor Noah dating since 2015. How is their relation? The comedian, television and radio host and actor Trevor Noah have been dating the American pop singer-songwriter and model Jordyn Taylor. This celeb has been dating each other since the year 2015 and they seem to be intensely in love for each other.  Their affair news is kept secret for certain time as this couple didn’t reveal that they were dating each other. Jordyn Taylor who faced a huge trauma looks like she is very happy with her man Trevor and has already thought about her future with him.

The breaking news of this celeb getting together came out as Trevor Noah at his Daily Show premiere party made the grand introduction of his model girlfriend Jordyn Taylor on 22 October 2015. Trevor used to have a girlfriend before moving to New York City. Trevor Noah and Jordyn Taylor met when Trevor moved to New York City after getting the chance to host his new gig 'The Daily Show'. Now this pair lived together on the Manhattan's Upper West Side. Trevor is originally from South Africa and had a girlfriend there whom he had to leave when he moved to the United States. He was dating Dani Gabriel when he was back in South Africa.

......I always severly procrastinate on the final chapter of my very favorite books. I do this mainly because I don't want the magic to end. In this case, I'm delaying for that reason but also because I know what pain the last chapter explores. I'm so proud of the dimply-faced crime who shared with us the deepest and sometimes darkest parts of his life, who taught us about nuance and the complexity of good and evil, and who introduced us to one of the strongest women we may ever know. It's time to read these last few pages. I'm delighted with the knowledge that the magic does carry on well past the back cover and I am beyond blessed to come home to that magic day after day. ?? thank you @trevornoah

According to Daily mail, Jordyn Taylor was in a very heartbreaking situation when her fiancé has killed in a freak car accident in California four years ago. Jordyn was in a relationship with her fiancé for almost five years before getting engaged. She did a lot of struggle as he faced the loss of her beloved boyfriend named Vincent Giuliano in 2011. Jordyn never got involved with many other men after the dreadful incident but as she met Trevor she fell for him. 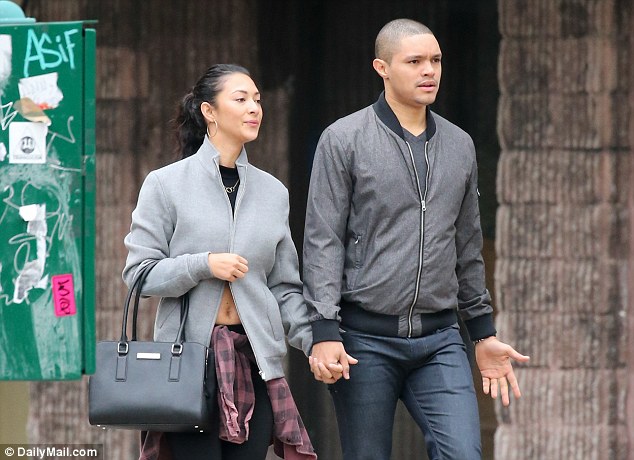 Jordyn Taylor signed a record deal with Manta Productions at the age of 15 and turn out to be a celeb with her largely-defunct MySpace page. Her soundtrack she gave for the movie 'Confessions of a Shopaholic' titled 'Accessory' heightened her fame in the American audience now she works as a model for Auto Shows.

The wait is over! Fetch your copy of #bornacrime today! Available in-stores and online now!

If you know me you KNOW it took everything in me to act like a normal human for this one. It was such an honor celebrating the launch of the Careers in Entertainment Initiative with the Smith Family Foundation. Thank you Will and Jada for having us. Absolutely GORGEOUS dinner.

Prior there also came the news of Trevor and Jordyn getting engaged and married with one another but till now no such news has hit the audience as Jordyn has also already visited South Africa to see Trevor's family. May be their closeness in such a little time might have led people to think about it or as they mostly keep their relationship news away from public it might be a secret which may come later as the news of their affair.