Frostsnow https://frostsnow.com/
Home Gossip Rydel Lynch shares a photo of her and his boyfriend Ellington Ratliff Before they started dating Rydel Lynch, one of the founding member of the pop band R5, has been spotted sharing her photos with her boyfriend, Ellington Ratliff before they were dating. The couple is working together since they joined the band in 2009. But is the chemistry in between the pair is a professional one or real life too.

Let's find out about the relationship of the R5 bandmates, Rydel Lynch, 24, and Ellington Ratliff, 24. 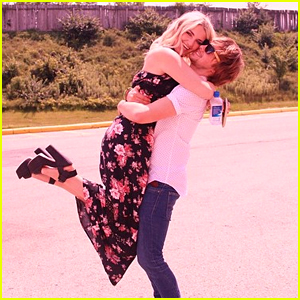 Rydel Lynch and Ellington Ratliff; Is the pair Dating?

People were unsure about the relationship between Rydel and Ellington. But according to R5's new documentary, the couple revealed that they are dating each other. The documentary suggests that the couple wasn't ready to show off their relationships but fortunately, one of the band members caught them holding their hand.

Similarly, the other band members also got a hint of their relationship so that they confirmed their status in front of the world.

In an interview, Rydel Lynch revealed that Ellington is the cutest one that she has ever met with. From day one, Rydel was attracted towards Ellington with his flirtatious nature. Ellington had the same behavior with all of the girls around him.

This caused Rydel to feel discontent and she felt like she was just another one of those girls. One day, Ellington asked her for a date on the beach to which she could not refuse and the relationship really started. Rydel also admitted that she had a secret crush on Ellington.

Additionally, Ellington said that the relationship between them was sure to happen whether they want it or not. And he is glad to have Rydel Lynch as her girlfriend with whom the whole experiences got even better.

The couple is really happy about their relationship. They always seem to work together, entertaining each other. They are very much comfortable with each other and supportive in any situation. The couple is often spotted together and they look very happy.

Although the couple has revealed their relationship to the world they have not decided to get married yet. They are enjoying their time together so they might not want to get into the hassle of getting married.

Hope the pair reveals about their wedding plans to their fans.