Ryan Haddon is an American journalist, presenter, and television producer. She grew up in Toronto and Paris while she completed her education from Boston University with a degree in communications. Haddon worked with several newspapers, magazine, and lastly in television as an entertainment-based reporter. She is married to the American actor Marc Blucas while she was previously married to Christian Slater.

Her husband Marcus Paul "Mark" Blucas is an American actor known for his role as Riley Finn in 'Buffy, the Vampire Slayer'. Marc was born in Butler, Pennsylvania to Mary Catherine and Walter Joseph Blucas.

Do you guys know about their married life? If NO, not to worry. We are for presenting you with more information about Haddon's married life with her husband Marc Blucas and also about her previous marriage. So, be with us.

After 2 years of divorce with her husband Christian, Ryan Haddon got married to Mark Blucas on July 25, 2009, in Erie, Pennsylvania. The wedding took place on the bayfront, where Reese Witherspoon and Kevin Costner were celebrity guests.

Blucas told the Times-News before leaving to the honeymoon, "felt like the luckiest guy in the world" after marrying to wife Ryan Haddon. Ryan and Marc haven't given birth to any child yet, however, Ryan has two children with her first husband Christian Slater.

Haddon started dating her first husband Christian Slater in 1998. She dated him for 2 years and married on 12 February 2000.

Haddon gave birth to two children, a son Jaden Christopher and a daughter Eliana Sophia before they decided to part their ways. The reason behind their separation is probably her devilish behavior towards her husband.

In 2003, she assaulted her husband at a Hard Rock Cafe by throwing a glass bottle on Slater's neck.

By that action, Slater had to get 20 stitches on his neck. Christian Slater was previously married to Samantha Mathis. 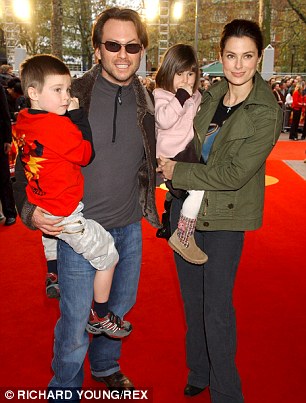 Caption: Ryan Haddon with her husband and children

After that event, Haddon was arrested for misdemeanor domestic battery against her then-husband Christian.

The couple announced their separation at Christmas 2004 and they started living separately since 2005 while they legally got divorced in 2007.

Looks like this couple was meant to be and we hope they stay true to each other for eternity. What do you guys think about this adorable pair of Marc and Haddon? Want to wish them too? Please, leave your opinions in the comment box below.