Frostsnow https://frostsnow.com/
Home Gossip Rosie O'Donnell Is Dating a New Guy, Who Is The Lucky Guy? What About Her Married life?

Rosie O'Donnell Is Dating a New Guy, Who Is The Lucky Guy? What About Her Married life? Roseann O'Donnell known professionally as Rosie is a comedian, actress, TV personality, and author based in the United States. The Emmy Award winner is also recognized as a rights activist for the LGBT community and also is a magazine editor.

Rosie started her career as a comedian when she was a teen, and currently is known as the host of The Rosie O'Donnell Show. She hosted the show from 1996 to 2002. The charitable actress is also nicknamed as 'Queen of Nice.'

Today we are going to talk about Rosie's sexuality, past relationships, children, and her most recent love affair.

In the year 2002, Rosie came out as a lesbian a month before her appearance as a lesbian mom in the comedy series Will & Grace. She announced that she is a 'Dyke' as part of her act at Caroline Comedy Club for Ovarian Cancer Research benefit.

Roseann O'Donnell Talks About Being A Lesbian

The 55-year-old who is a foster and an adoptive mother came out as a lesbian to bring attention to the issues regarding gay adoption. She openly talks about being a lesbian and supports the LGBT community.

Moreover, she got married to former marketing executive of Nickelodeon Kelli Carpenter in San Fransisco on 26th Feb of 2004. She and Kelli tied the knot just 2-weeks after same-sex marriage was legalized by Gavin Newsom, Mayor of San Fransisco.  Despite all the hate, and negativity, the comedian did what she thought was right for her.

Meanwhile, she had already adopted a child before her marriage with Kellie. In 1995, Rosie adopted an infant now known by the name Parker Jaren O'Donnell. Along with Parker, the actress adopted four children; she adopted Chelsea Belle O'Donnell in 1997, Blake Christopher O'Donnell in 1998, and Vivienne Rose O'Donnell in 2002.

Know More About Rosie And Her Daughter Chelsea's Relationship

Sadly, the couple announced their separation in 2009.

In 2011, Rosie announced that she was engaged to Michelle Rounds, an executive-search consultant. The two got married on 9th June of 2012 at a private wedding ceremony in New York. 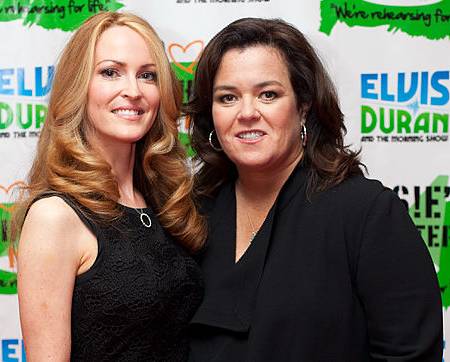 With Rounds, she adopted another baby girl Dakota in 2013. However, Rounds and Rosie's marriage only lasted for 2-years. Their divorce was finalized in Oct of 2015. O'Donnell got the full custody of baby girl Dakota.

Who is Roseann O'Donnell currently dating? Is she married?

Rosie who is a best friend of superstar Madonna and a good friend with Penny Marshall is reportedly dating a new woman.

Rosie shared about their relationship during an interview on the Howard Stern Show. Moreover, there are also many pictures of the two on Instagram, and they seem to be very happy together. Bernice Burgos Daughter' Ashley Burgos' Dating History: She Is a Mother to a Child, Is She Married?