So, everyone is curious to know if their marriage is going well as their career. Today, on Frostsnow, we are going to deal with the private life, affairs and marital relationship of Ronda Rousey and know about her career and net worth.

Ronda and Travis, who officially became a couple in October 2015, after more than a year of dating, got engaged on April 14, 2017, while on vacation in New Zealand. Browne was reported to have proposed Ronda with a diamond ring beneath a waterfall.

Later, after the 4 months of engagement, the duo got married on August 28, 2017, in Hawaii, the home state of Travis. Ronda Rousey and Travis Brown in their wedding

It seems the married life of the couple is going well. However, the couple has not given any indication about having a child until now.

My #mcm @travisbrownemma surprised me with baby chickens!! Two silkies and two dominiques!! ??????????Pic by @layziethesavage

But the couple's love story was not easy as it seems. Even though Travis is yet to have any baby with Ronda, he is the father of two sons, Kaleo and Keawe, from his previous relationship.

Prior to Ronda, he was hitched to wife Jenna Renee, whom he married in January 2015. But the relationship didn't work out for him, leading to a divorce on February 21, 2016, a year of his second marriage. Travis and his ex-wife, Jenna Renee

Ronda was also in a relationship with her boyfriend. However, the details about her ex-boyfriend have not been revealed. In her autobiography My Fight/ Your Fight, she says that she used to have violent altercations with him.

Seems things have become normal now, as Travis and his new wife Ronda are in a happy relationship.

Congratulations and best wishes from us.

Ronda, who began to train judo with her mother, AnnMaria De Mars, since the age of 11, got her debut in the Olympic Games in Athens in 2004 at the of 17. The youngest judoka in Athens, Ronda won a gold medal at the World Junior Judo Championships in Budapest, Hungary, the same year.

The career of Ronda took a giant leap in 2006 when she became the first U.S. athlete to win two Junior World medals after winning the bronze medal in Junior World Championships. 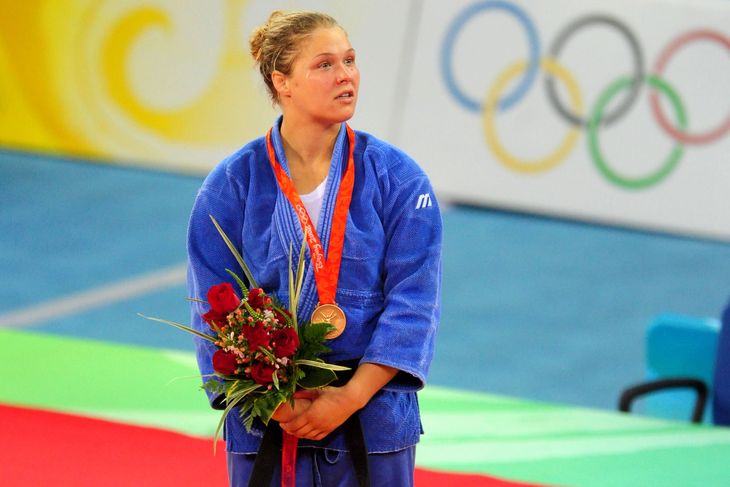 Later, retiring from judo at 21 after the Olympics, she began to train in Jiu-Jitsu at Dynamix MMA with Henry Akins from the year 2011 to 2014. And making her debut on mixed martial arts on March 27, 2011, she gave a remarkable performance after winning over Edine Gomes with an armbar in 25 seconds.

On July 30, 2011, she debuted on Strikeforce and challenged Tate. On March 3, 2012, she got a handful success after defeating Tate and became a new Strikeforce Women's Bantamweight Champion. 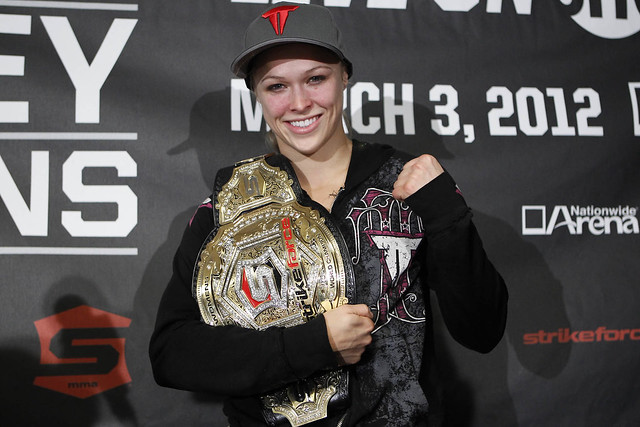 The success and passion of Ronda couldn't be stopped as she, in November 2012, became the first female fighter to sign with UFC which was announced by UFC President Dana White officially.

On August 1, 2015, she fought against Bethe Correia in Brazil at UFC 190 and, surprising everyone, she won the match in 34 seconds with her knockout blow.

Later, she appeared in WWE with the nickname Rowdy, for which she took permission from Rowdy Roddy Piper. Ronda made her first appearance alongside the Rock during Wrestlemania 31, where she smacked down Triple H and Stephaine Mcmahon.

Here is the video of it.

After the backstage meeting with Paul Heyman and others, Ronda acknowledged herself with her fellow members, Shayna Baszler, Jessamyn Duke and Marina Shafir.

Since then, she has stayed with WWE and has been entertaining the whole world with her performance.

Net worth of Ronda Rousey

Ronda has also appeared in many movies, like The Expendables 3, Furious 7 and Drunk History. She is reported to have a net worth of $12 million as of June 2017, as per the report of Celebrity Net Worth.