Frostsnow https://frostsnow.com/
Home Gossip Rita Volk Talks About Her Onscreen Lesbian Kiss, Is She A Lesbian In Real Life Too? Past Affairs? High school memories are one of the most treasured moments of everyone’s life. Everyone tries to be cool and fit it. The ‘Faking It’ series depicts another version of the word ‘cool’. The TV drama shows how Hester High supports outcasts as cool. Actress Rita Volk portrays the role of Amy while Katie Stevens can be seen as Karma. Even though they are mistaken as a lesbian, they decide to go with it.

Volk’s relationship status is single as she hasn’t been engaged to anyone. She shared a playful kiss with her co-star in the series which made her fan curious if she is a lesbian in real life as well. Let’s find out what she has to say about her kiss and her affairs:

Rita Volk auditioned for the role of Karma first

When Volk tried her luck in acting, she first auditioned for the role of Karma. In fact, she even had to go through 3-4 audition processes. Yet, she ended up getting the role of Amy. Volk is really glad that things turned out that way as she totally loved her character. 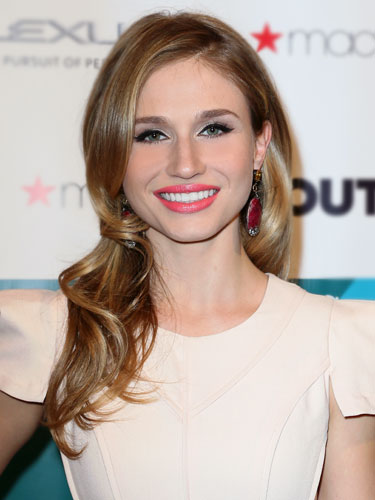 In a 2014 interview, Volk candidly talked about her character, Amy. She said:

‘I think that she's so complex and layered; she has all these secrets. She's a vulnerable girl but she's also very strong and does her own thing.’

When asked about the Kiss which happened in the first episode, Volk says that it meant like a journey for her character who tries to discover its meaning. It definitely arouses feelings for Karma but we need to watch the full series to know how she deals with it. Volk seems to be quite proud of how she became successful to hook people into it.

Just in case you are wondering, Volk didn’t seem to have much trouble kissing her co-star on-screen. She revealed that the kiss came pretty easy in the beginning. Later, it started happening more often which didn’t appear as a big deal for Volk.

444 supporters already?! Omg this is crazy! If you want a shoutout dm your proof you signed or share it and tag #savefakingitpetition I'll give you shouts out in the morning! Goodnight and thanks for all the support! *LINK IN BIO*

She seemed super comfortable doing it. Considering the chemistry she shared with her co-star, it is hard to believe that Volk is straight in real life.

Watch Rita Volk and her co-star talk about making out:

Although Volk’s relationship status is single at present, she revealed that she went on a lunch date with ‘Faking It’ executive producer and writer Carter Covington once. Volk was also linked with Jamie Kennedy in between 2014 to 2015. The pair is said to have dated. Apart from these, Volk isn’t involved in any kind of affairs.