Frostsnow https://frostsnow.com/
Home Gossip Rami Malek isn't Married. Does he have a girlfriend? Know his Love Life and Affairs

Rami Malek isn't Married. Does he have a girlfriend? Know his Love Life and Affairs Hardly anyone who has been following the critically acclaimed USA Network television series Mr. Robot didn't have a crush on Elliot Alderson. And even more, crushes belong to the one who plays the deeply depressed hacker on the dense prestige-drama show, Rami Malek. 36-year-old Rami Malek has created quite a buzz in the industry and among the fans.

As of 2018, dashing Rami Malek is believed to be single. However, there have been rumors of his dating and affairs. And thankfully, he hasn't tied the knot yet, though.

Let's get into details of Rami's personal life.

Back in 2012, when Rami Malek had been playing the vampire from Egypt in The Twilight Saga: Breaking Dawn – Part 2, he was allegedly in a relationship with his co-star, Angela Sarafyan. Fans were swooning over this “near perfect and beautiful” couple.

But nothing had been and has been confirmed regarding this matter by either Rami or Angela are a couple or not.

So, besides Angela has he been ever rumored to be dating anyone. Many may not believe, but yes he and After the Ball (2015) actress, Portia Doubleday has been linked several of times. Is the pair really in a relationship or not? Let's find out.

Rami Malek and Portia Doubleday; Are they dating?

With a couple of rumors of alleged girlfriend and boyfriend, Rami Malek and Portia Doubleday have made it to the headlines. However, many of their fans seem to be patternless and eager about their relationship.

Since 2015, Rami was allegedly in a relationship with his Mr. Robot co-star Portia Doubleday, 29. 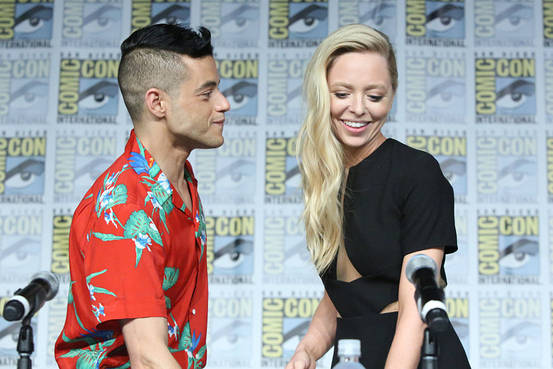 Rumors have it that Rami and Portia are still an ‘item’, but until 2017, nothing has been confirmed. But after Portia's Instagram post on 9 September 2017, the pair's relationship became clear. Portia made her relationship clear with her co-star, Rami Malek. Check out the Instagram post.

Oldie but goodie--J is for January.

The two make a good couple, isn't it?

Besides dating rumors, Rami Malek has been subject to various speculations about him being a gay. This rumor was even more fueled by his open display of spoken love for the producer and co-actor of Mr. Robot, Christian Slater.

Malek captioned a photo for Christian's birthday on Instagram,

Everyone comment happy birthday so Christian can see! I literally love him he's the sweetest most charming most talented dude ever and he makes rami so happy. Happy birthday dude! #elliotalderson #mrrobot #ramimalek"

Well! we can just hope that Malek comes forward and reveals about his private life ASAP.