The 71 years old, Peter Dennis Blandford Townshend known as Pete is a British lead guitarist for a rock band “The Who”. He is also a multi-instrumentalist, musician, singer, and songwriter. He comes from a musical background, Pete is the son of Cliff Townshend and Betty, both are a musician. He started his musical career with a skiffle/rock and roll band and now Pete is one of the best guitarists in the world. In 1994 he received Grammy Awards for the Best Musical Show Album.

Pete Townshend is the former husband of Karen Astley and they are parents of three children. The couple got divorced in 2009. Read the full article to know about Pete’s relationships and affairs.

The fashion designer, Karen Astley is the daughter of a British film composer Edwin Astley. Pete and Karen were first introduced to each other at Ealing Art School. They started dating each other and soon fell for each other. The couple got married on May 20, 1968, in London and settled in Twickenham, South-west London. 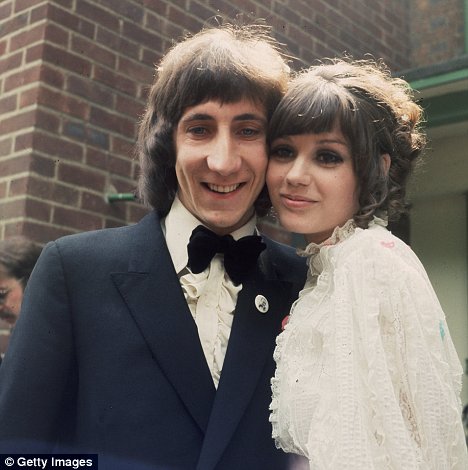 Caption: Pete Townshend and Karen Astley in their wedding dress

Pete and Karen divorced in 2009

Pete and Karen were happily living their married life until 1994 when the couple announced their separation. Pete once got arrested for watching child X-rated movies, which created conflicts between the couple. Pete officially divorced Karen after 15 years of separation in 2009 to marry his half age girlfriend Rachel Fuller.

Rachel Fuller is a successful English musician who used to work with a German Composer. Rachel is 28 years younger than Pete. Pete invited Rachel to come to New York to work with him but she refused him. Then, again they met in a show and they began formal conversations. Music brought the couple together and they soon started working together. Pete was just separated with his first wife Karen, before meeting Rachel. Pete and Rachel started dating each other soon after.

Video: Pete and Rachel performing together.

Now, Pete and Rachel live together at The Wick, Richmond, London. It is believed that Pete divorced with Karen to marry his half-age girlfriend, Rachel. Pete has confirmed that he is soon getting married to Rachel Fuller.

We wish for their upcoming marriage and hope this time Pete works out his relationship. What do you think about Pete? Please, leave your opinions in the comment box below.