Penn Dayton Badgley is an American actor and musician. He is best known for his role of Dan Humphrey on The CW's series Gossip Girl.

He has also starred in numbers of films including John Tucker Must Die, The Stepfather, Easy A, Margin Call, and Greetings from Tim Buckley. Badgley is currently the lead singer for Brooklyn-based indie band 'Mother'.

His wife Domino Kirke is an English-American singer of English nationality. She was named after Domino Harvey, whom her mother met when Harvey was a young girl.

The 30-years-old Penn Badgley recently remarried Domino. The Hollywood buzzed with the news of their wedding. Stay with us to know more about this spicy patch up story!

News flash! Penn and his wife Domino just tied the knot for the second time.

Wedding bells are in the air nowadays in the Hollywood industry. Just like Erin Andrews and Jarret Stoll, Daniel Panabaker and Hayes Robbins, another couples Domino and Penn also married on the same date, last Saturday on June 24.

They got more attention than other couple with the spicy news of their wedding to the same person for a second time. Badgley and Kirke got married again after divorcing from their first marriage; because of that, they are now the spicy topic in media.

The pair conducted their marriage at Lake Waccabuc in upstate New York. The bride came on a gorgeous look with her stunning dress that was looking even attractive on her eye catching personality. She totally rocked the venue with her vintage look, showing her artistic tattoos along with gems adorning her hair.

Her wedding gown totally changed the human mindset that wedding dress should not be always cliched meringue dress. Way to go girl!

Domino posted on her Instagram a photo of her husband Penn with the caption “‘You only get married twice, once’ ????I love you @pennbadgley,”. Congratulations to the newly married long-running couple.

The couple had their first wedding at a courthouse on February 27, 2017, in Brooklyn, New York.

Here's the picture of their first wedding!

During their first wedding, Domino dressed a white lace where her exquisite tattoos were the highlight of the event. The couple enjoys the ceremony with their friends and family who wear the casual dresses appearing as the guests of their marriage. 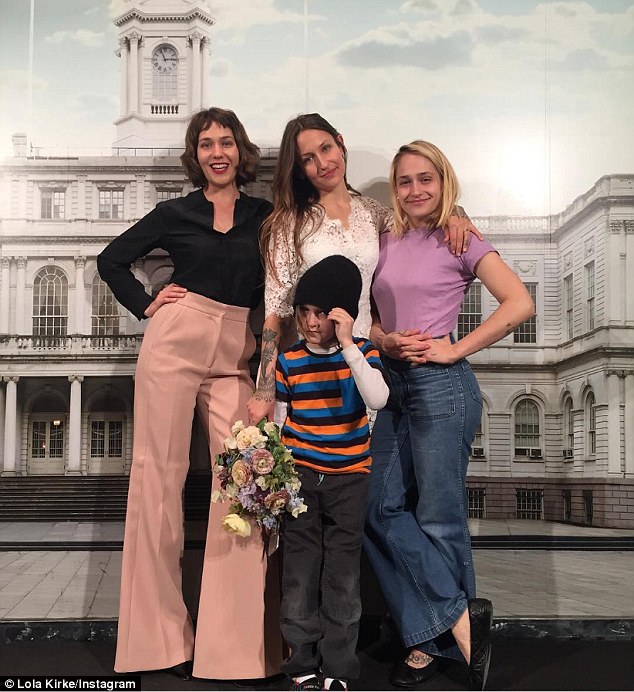 On the first wedding of Domino and Penn

Do not forget to enjoy the couple's wedding pictures

Their common fans are so cheerful after the news of Domino and Penn's second wedding. Let's hope this time they will be together for a life time and always make their followers happy.

Also Read: Debra Messing family bio and rumors spread across regarding her affair.

Congratulations again for their journey together and wish their relationship stay a lifetime.