Well, the actor recently took the stand to officially confirm what really exists in between them. So, let's find out if the couples are really in a relationship or it's just one more rumors floating on the internet.

Must Read -  Song Hye Kyo And Song Joong Ki Planning to get Married in October: Rumors of Pregnancy

Are Song Hye Kyo and Song Joong-Ki dating each other?

It's an undeniable fact that the co-stars have been the most loved onscreen couples, ever since the first episode of the romantic saga 'Descendant of The Sun' was aired. But the questions regarding them being in a relationship even in their real life apparently became the hot topic just a few months back.

Video showing their onscreen chemistry in Descendant of The Sun

The Co-stars are reportedly rumored to be dating each other since the day they met on the sets of the 'Descendants of The Sun'. However, no solid proof ever surfaced on the internet.

But it was only after the release of a series of photographs on Twitter showing the actors more like a real-life couple, the rumor made a comeback again. The pictures that showed the co-stars holding their hands together and giving an intimate smile to each other made it more apparent to the fans that the stars were actually dating each other.

However, it was only after the rumors regarding Song Joong-Ki purposing Song Hye Kyo on his birthday started surfacing on the internet, the Co-stars finally made their stand to make their relationship stature clear to the public.

"Hye-Kyo and I are both aware of those rumors, and we are really enjoying them. We even talk about them during company dinners. I think that the viewers think that because of the overwhelmingly positive response that the drama has gotten".

They further added that the rumors are completely untrue and that they are just good friends. Well, whatever they said may or may not be true, but it definitely signals towards the point that the South Korean heartthrobs are in no mood to publicly announce their relationship, even if they are really dating each other. 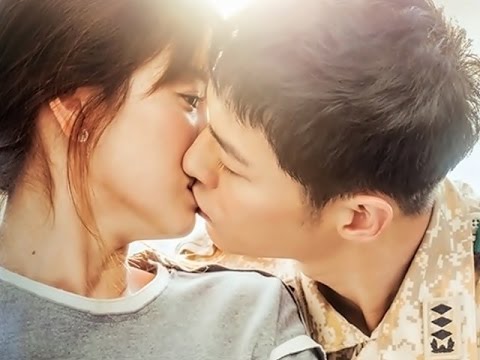 Meanwhile, with the end of the TV series 'Descendents of The Sun', the on-screen couple is reported to make a comeback in an upcoming television drama "Man to Man" Which is about to be aired in the mid of 2017, good news for the fans.

Maybe this time the on-screen couple falls in love in real and we hope they do and also hope that they make their off-screen romance public to their fans. All the best to this adorable pair for their future.

Song Joong-Ki and Song Hye Kyo who was rumored to be dating in the past is engaged now and the couple is already up discussing their upcoming wedding. Recently, they were rumored to be meeting parents to further plan for their marriage, however, talking about it in public, both Sng Joonf and Song Hye claimed the rumors to be untrue.

However, if sources are to be believed, the couple's parents have already met and decided the further plans for the wedding. According to the reports, the stars will be getting married on October 31, 2017.

Song Hye-Kyo and Song Joong-ki Are Married: Their Love Life

Song Hye-Kyo and Song Joong-Ki who had been dating for a few months are currently married. The couple got engaged on July 5, 2017. Their marriage ceremony was conducted on  October 31, 2017, at Youngbingwan, Hotel Shilla in Seoul. All their family members and close friends attended their wedding.

Moreover, actors like  Lee Kwang-soo, Yoo Ah-in, and Park Bo-gum were also present at the function. Before Song Joong-Ki, Song Hye-Kyo was in a relationship with Lee Byung-hun. The couple began dating in April 2003 and broke up in June 2004. Further, she also dated actor Hyun Bin for a short period of time.

Who is Song Hye Kyo married to?

Who are Song Hye Kyo ex-boyfriends?

When did Song Hye Kyo and Song Joong-Ki get married?