Frostsnow https://frostsnow.com/
Home Gossip Olympian Diana Taurasi net worth. See how much she earns with her WNBA career. Is she Lesbian?

Olympian Diana Taurasi net worth. See how much she earns with her WNBA career. Is she Lesbian? Olympic gold medalist Diana Taurasi is a very talented lady. Professional basketball player Taurasi has an amazing net worth of $1.5 million. She is widely known among basketball fans. Till date, Taurasi has been awarded many awards. You might be delighted to know that Taurasi’s salary is as high as her net worth. She earns $500 thousand annually.

Taurasi owns a luxurious house in the Manhattan Beach. She bought the mansion for $3.3 million. It is a three-storied house which covers an area of 2,040 square feet. It has three bedrooms, three bathrooms and other facilities such as the spa, walk-in closet, ocean facing balcony, hardwood flooring, and gorgeous kitchen. The surrounding of Taurasi’s Manhattan mansion is also very beautiful. 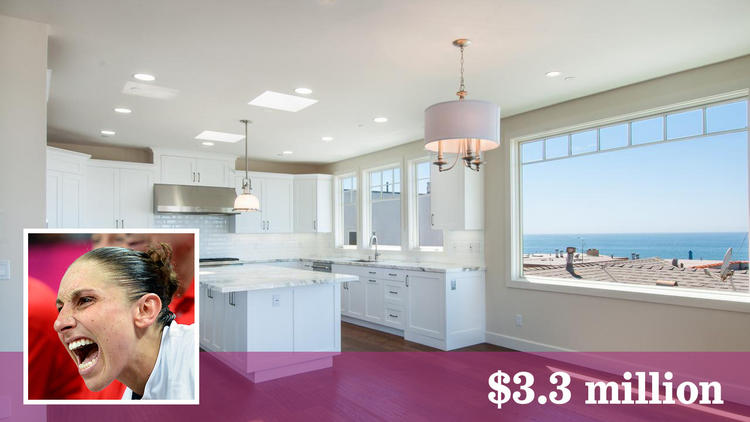 Taurasi is a shoe lover. However, she does not wear cheap shoes. Her basketball shoes are also very expensive. She once posted a photo of her Kobe Venomenon III on her Instagram.

Diana Taurasi got the opportunity to work in the 2004 WNBA Draft by the Phoenix Mercury. She mainly plays guard but sometimes Taurasi is also seen as a forward. During her career, she helped her team win several times. During her early days at WNBA, Taurasi made her team win a match against Seattle Storm. Despite being injured, Taurasi acquired 16.0 points along with 4.2 rebounds and 4.5 assists per game in 2005. In 2006, Taurasi broke Katie Smith’s league record. In the same year, her score rose up to 25.3 points, 4.1 assists and 3.6 rebounds per game. In 2007, Taurasi and her teammates made their team Mercury to win the first WNBA title. It was when Taurasi won a NCAA title, a WNBA title, and an Olympic gold medal. Her career did not just stop there.

Her international career began in the year 2005. She played for Dynamo Moscow then. In 2010, she played for Turkish champion Fenerbahce. In 2011-2012 Taurasi played for Galatasaray. Taurasi signed a contract with UMMC in on 16th May 2012. Even at present Taurasi plays for UMMC.
This is how Taurasi has earned all her net worth.

Till date, Taurasi has won various awards. She is the winner of three WNBA championships that happened in the year 2007, 2009 and 2014. She is the recipient of the WNBA Most Valuable Player Award, two WNBA Finals MVP Awards, four Olympic gold medals, five and the WNBA Rookie of the Year Award (2004). Moreover, Taurasi is one of the 9 women to win an Olympic Gold Medal, a NCAA Championship, and a WNBA Championship. She has also been voted as one of the WNBA's Top 15 Players of All Time.

Talking about Taurasi’s personal life, Taurasi does not have a boyfriend yet and she is not married too. However, her fans are doubtful about her sexual preference. She has been rumored of being lesbian because of her kiss with Seimone Augustus. The photo where Taurasi was seen kissing Augustus went viral. However, Taurasi has never spoken anything regarding this matter. What do you think about Diana Taurasi? Please leave your opinion in the comment box below.