Nikki Reed Pregnant With The First Child With Husband Ian Somerhalder, Her Past Affairs It looks as if the year 2017 is babies year as many celebrities gave became parents. We heard numerous pregnancy news and even saw some pregnancy fashion trends.

Just like them, the 29-year-old gorgeous actress Nikki Reed and her beloved husband Ian Somerhalder are expecting their first child, and the couple is insanely happy about the little angel joining the family.

The amazing Hollywood couple who is together for nearly three years now is soon-to-be a parent for the first time as a new member of the family is coming soon.

Almost a couple of months ago, Nikki and Somerhalder announced that they were expecting their first child. The pregnancy announcement was made with an Instagram picture of Ian kissing the growing baby bump of the stunning mom-to-be Nikki. Here's that tweet, have a look.

To our friends, family, and rest of the world. In my 38 years on this earth I've never experienced anything more powerful and beautiful than this. I can't think of anything more exciting than this next chapter and we wanted you to hear this from us first. This has been the most special time of our lives and we wanted to keep it between the three of us for as long as possible so we could enjoy this time with each other and our little one who is growing so fast...because that's what they do, they grow so fast. Thank you for your kind energy. Love, Ian

After a few weeks of the announcement, these two love birds were spotted strolling the romantic streets of Venice. The 29-year-old Nikki flaunted her baby bump in gorgeous navy blue jumpsuit showing her mothership style. On the other hand, Ian looked casual with a cap and fitted T-shirt. They were holding hands while both went out to get a bite to eat.

My guy, my man, my honey, my partner in this life, my better half in every way. At exactly this time two years ago today we walked hand in hand into the next chapter, our chapter, together. Every day gets better, every moment calling for even more. Navigating the waters of life with you is the greatest and most rewarding adventure I've ever known. We climb, we grow, and we laugh at all of it. Thank you for being exactly who you are, and for loving all of me. Thank you for your willingness to go even deeper. Until you, I had no idea what could be. Until you...Happy Anniversary ?

Well, we would like to congratulate this adorable couple for this exciting step, and we are eager to see the exclusive picture of the baby very soon!

Love Affair And Amazing Wedding of Nikki Reed and Ian Somerhalder: Nikki Was Once Married To Paul McDonald

Before the Vampire Diaries lead actor, Ian Somerhandler, The Twilight star Nikki was married to an American singer Paul McDonald.

They were so madly in love with each other that the couple got engaged in June 2011, just after a couple of months of dating and eventually got married in the following year on October 16 in Malibu, California. 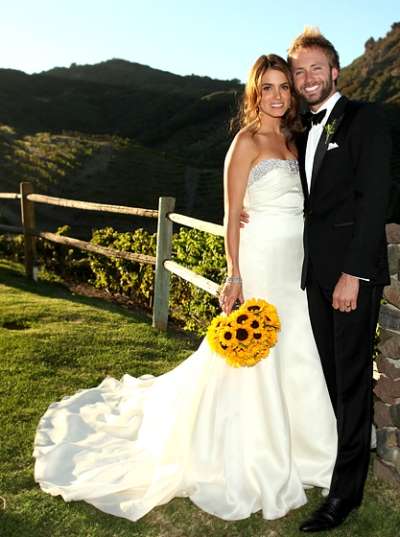 However, after three years of their togetherness, the twosome filed for divorce citing the reason as "irreconcilable differences" in May 2014 that was finalized on 2 January 2015.

Soon after the divorce with Paul, Nikki met the Lost series actor Ian Somerhandler during the mid-2014 and eventually fell in love and started dating. Then boyfriend and girlfriend: Nikki Reed and Ian Somerhandler sharing their kisses

Nearly after a year of dating, the couple got engaged in February 2015 and eventually got married in a grand wedding at Topanga Canyon, in Malibu, California., just after two months of dating. Ever since these "two bodies single soul" are living happily and now their happiness is going to be doubled. We wish them all the very best for their tomorrow. For more updates, stay connected with Frostsnow.