Sagarika Ghose, Times of India’s consulting editor is married to Rajdeep Sardesai, Headlines Today host. Despite the fact that this two tied the knot in 1994, their relationship is still as young as ever. Their hearts are as matching as their profession. That might be one of the reasons behind their long-lasting relationship.

Ghose and Sardesai first met each other in 1986 in Jharkhand (known as Jamshedpur in the past). They were both there in order to interview Russi Mody who is the former chairman of Tata Steel. That interview was very important for each one of them because it was for The Rhodes Scholarships. However, only Ghose won it.  Sardesai recalls the past and said: “She got it. I did not. I am still trying to get back,”

Ghose also recalled that day and said:  “In those days, Rajdeep was extremely laid-back; in fact, he was so laid-back that he was horizontal. I remember when the results were being announced he was sleeping somewhere up there in his room.”

However, destiny made them husband and wife. This cute pair got married on 11th April 1994 in an auspicious Hindu wedding ceremony which took place among family and friends. Ghose has two amazing kids with Sardesai, son Ishan, and daughter Tarini.

At present, Both Ghose and Sardesai are successful in their profession. In India, there are only a few people who do not know about these amazing journalists. Similarly, they are also famous worldwide.
Talking about their married life, Ghose and Sardesai’s relationship is in really great terms. Despite being married for so many years, Ghose and Sardesai’s bond looks unbreakable. Ghose has deep respect and love for her husband. During an interview, she said: “Rajdeep is a workaholic, a newsaholic, a journoaholic. Thank God he is not an alcoholic. He is obsessed with what’s on the ticker, the top bands. This way the people who are doing the work are not empowered because they keep trying to second-guess him. In fact, my team is obsessed with Rajdeep. I delegate much more and believe if you empower people, things run on their own and you get fresher ideas.”

Ghose’s husband Sardesai is also a very honest and understanding person. He is very close to his family and has successfully kept his kids away from media. During an interview, he said: "My wife and children are my biggest critics. The world of my kids is far remote from my world of news." 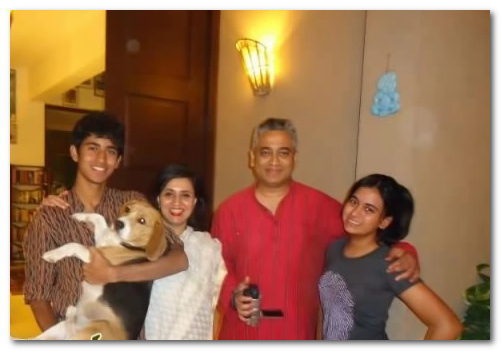 Image: Sagarika Ghose and Rajdeep Sardesai with their children

Aren’t this pair amazing? What do you guys think? Please leave a comment.