Nathan Sykes Broke Up With Ariana Grande, Details On Their Affairs And Relationship The youngest member of the Britsih Boy Band The Wanted, Nathan Sykes has dated many high-profile musicians. The relationship of Nathan with the Dangerous Woman's singer Ariana Grande is one of his most talked relationships in the Tinseltown. However, the couple's breakup came as a shock for millions of their fans.

Ever since Nathan and Ariana broke up, people are curious if Nathan has been the center of attraction for most of his admirers. His fandom is curious to decode the current relationship status of the Unfinished Business singer.

So, is Nathan dating someone currently or is is single? Let's find out about his current relationship status.

After the Breakup with Arian Granade, Is Unfinished Business singer Nathan Sykes Dating Someone?

The couple who hooked up in late 2013, after Grande shaw Nathan on a red carpet for Glamour Awards in March 2013. It was like a love at first sight for Grande but however, the couple broke up after five months of dating.

After the high-profile break up with Grande, Nathan seems to prefer low-key in public in regards to his love life and dating.

Life will give you the chance when it's your turn and unless the time comes one has to keep themselves busy. As of now, Nathan is busy with his career. Recently on June 14, Nathan shared a picture of himself performing in Seoul, South Korea and on the basis of his caption, he is headed to Singapore for his live concert.

"Had the most amazing time in Seoul! Next stop ... Singapore!! (Living in @davidnaman!!)".

Had the most amazing time in Seoul! Next stop ... Singapore!! (Living in @davidnaman!!)

And the singer really seems to miss his days while he performed in Seoul.

We too miss your performance!

It's never too late to find the love and we believe Nathan too, will find a perfect partner for himself as there's a long road ahead for the Unfinished Business singer.

Here's the rub, Nathan is reportedly currently single and seems to be in no hurry to be in a relationship after the breakup with Grande.

Nathan and Grande started dating each other in 2013 after the two worked together for the first time in the song named, Almost Is Never Enough released on August 19, 2013. 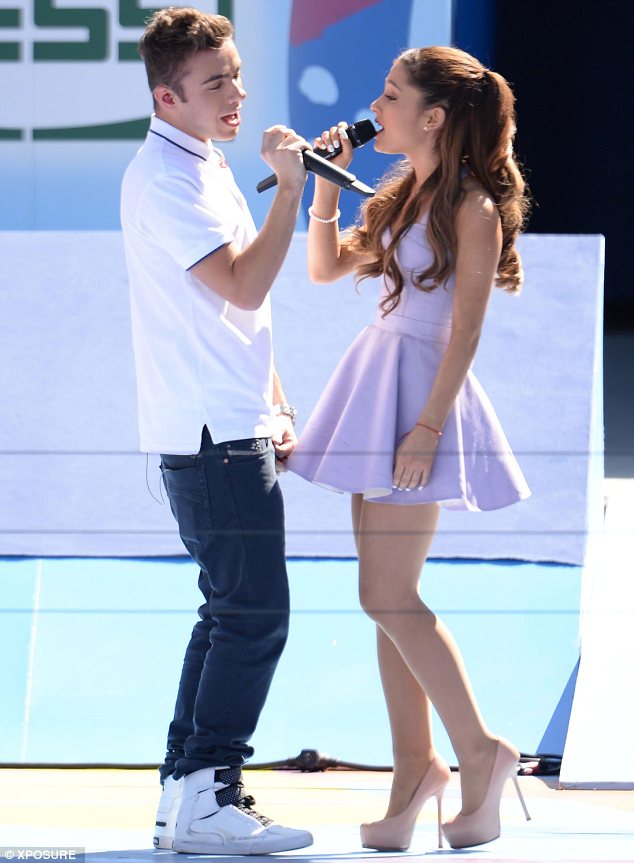 Talking about the couple's relationship, in a candid interview Grande stated that,

I saw him in March [2013] on a red carpet, and we locked eyes with each other all night. I thought, he was cute as hell. Nothing happened obviously,

It was a really fun day - he was very sweet and cute. We started talking and then it just went from there. No, actually we didn't really start talking until we met again at Justin Bieber's tour in August.

After the two together in "Almost Is Never Enough", many began to speculate that the two are dating. With months of speculation on their relationship, on September 24 Nathan made their relationship official via his Twitter account. He tweeted,

So, I guess it’s obvious now … ?? thanks to everyone who is being so lovely. I’m so happy ?? #butweareterrified #pleasedontkillme #orariana

Within some minutes, Grande also tweeted,

we hesitated saying anything as people can be a bit insensitive but thank u ? we value all of your happiness, thank you for valuing ours ??:)

Thir fandom was extermely "over the moon", after the couple officaly revealed their relationship.

Nevertheless, the dark side of the couple's relationship hit the horizon on October 19, when Grande revealed that the two were only good friends.

Ever since the rumors of their separation splashed on the web. In the month of January Grande cleared the air in an interview with DJ Showbiz Shelly. She revealed that,

We broke up a little while ago, but he’s a really good friend.

He’s so talented. I am so glad to met him and have a friend like him in my life. He’s an amazing person. It was very civil. It was mutual.