Frostsnow https://frostsnow.com/
Home Gossip Musician and Model Karen Elson Back in the Fashion Model after Divorce; Know about her lifestyle

Musician and Model Karen Elson Back in the Fashion Model after Divorce; Know about her lifestyle Karen Elson, the tall and ethereal lady with a glamorous stature born in Oldham, England, is a model, a singer, musician and a songwriter. She started her modelling career in teen 16. Her career in London and Paris was frustrating for her but achieved success in Tokyo. She contributed a lot in back vocals of numerous bands and built her singing career.

But in 2010, she released her own debut album” The Ghost Who Walks” which got favorable reviews. Her voice was compared to Jenny Lewis and Loretta Lynn by the Spin Magazine and also ranked her album as 7 out of 10. Then she did covers of Lou Reed, Jaxkson C, Frank’s etc.

After her divorce with Jack white in 2013, the lady has taken some time – seven years for her another album “Double Rose's” which is to be released on  April 7, 2017.

She says this album is basically a real reflection of her understanding with her contradictions and acceptance of owning who she is and owning the woman that she has become. Let's know more about her.

She wears size 6 dress, bra size of 32A and shoe size of 9 (US). The lady is a die hard vintage collector. She finds easier to wear vintage in the evening. She loves A.P.C, Rag and Bone and BLK Denim. Karen likes flat sandals/shoes more than heels. 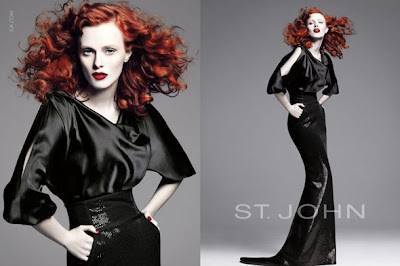 Karen with red hair, delicate porcelain skin, and blue eyes likes a less makeup on her. She uses La Mer mixing with Rodin's face oil for hydrating her skin. Karen uses Sonia Dakar products; her Bergamont cleanser and Snake Venom sunscreen is the favorite one of the lady.

She is the fan of all the Malone London fragrances, among which Wild Bluebell is her favorite one. She uses the Wood Sage & Sea Salt body crème and Red Rose bath oil.

Effect of Divorce on Karen's life

The divorce of iconic British supermodel with husband Jack White after six years of marriage has affected her life. Her divorce had been challenging and emotional at the time.

The life of Elson who had once a successful music career and modeling career with the top brands like Louis Vuitton, Gucci, Marc Jacobs had a hard life with two kids after divorce.

Lady looks perfect in her dress by "The Vampire Wife" at Billboard HQ on April 6. 2017.

But after two years of divorce, she has overcome her self-doubt, insecurities and comeback in the music industry with the positive spirit and full faith in herself. We wish for the grand success of her new album. John Kidd and his ex-wife Jackie Johnson married Life; Where are the ex-couple? Children?