Phelps as a former professional competitive swimmer had a very successful career and same can be said about his love life. He is married to Nicole Michele Phelps. Talking about his wife she is a model and was Miss California USA 2010. She also was a contestant in the Miss USA pageant.

Let’s look into the details of their relationship.

Phelps and Nicole secretly got married on June 13, 2016, in Arizona. They tied the knot in a courthouse ceremony and the news was kept away from the media. They officially became husband and wife back in June. The reason they did a courthouse ceremony was to make it easier for his wife Nicole and son Boomer to travel with him for the Olympics in Rio.

They married for the second time again in October and this time they exchanged their vows in a lavish outdoor ceremony at the El Dorado Golf & Beach in Cabo. It was also a secret ceremony and included their closest friends and family.

The guest list also included Swimmers Allison Schmidt and Natalie Coughlin. The interesting thing about the wedding was that their son Boomer also witnessed his parents getting married, watching from the arms of bridesmaid Allison Schmidt.

Phelps later shared the photo of his wedding to his fans through his Instagram account and you know what, both the bride and the groom looked stunning and their smile just added life to the photo. Phelps after a week of their marriage confirmed the nuptial during a Facebook Live videotaped while he was golfing at El Dorado. 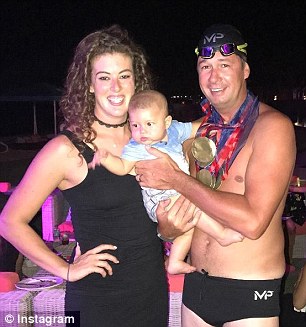 Chris and Allison with Boomer at the Halloween party

The pair also hosted a Halloween party the next day after their wedding which included around 50 guests. Chris Stutts one of the good friends of Phelps was also in attendance and was dressed up like the Olympian in a Speedo wearing the fake gold medal around his neck.

Now let’s take a trip back to the day this lovely couple met. Phelps and Nicole first met at the 2007 ESPY awards and started dating in 2009. Like any other couple, they also suffered a brief setback prior to the 2012 Summer Olympics.

The couple broke up for few years and was again reunited in 2014. It looks like he couldn’t just let go of her. In an interview with USA Today Phelps said,

“I said to a couple of my friends if I ever had the chance to get her back that would be it. She was the one I loved the most."

Well, they are really made for each other. Nicole and Phelps are blessed with a baby boy, Boomer who was born on May 5, 2016, before they were married. Phelps even retired from swimming to be with his newly born. Phelps has said,

"This is the part of my life where I get to start a whole new chapter, which is getting to build a family with Nicole."

It looks like Phelps will make a great father and we would just like to wish both Nicole and Phelps all the best for their future together.