Life unfolds itself in a mysterious way. Everybody comes with different fate in their life and no one can be assured of what's gonna happen during their lifetime. Accidents don't arrive with a bell on its neck, but that accident teaches us tremendous lessons in life. When something bad happens, you have three choices; you can either let it define you, let it destroy you, or you can let it strengthen you.

The Canadian singer, Michael Buble, and his family experienced the hardest time of their lives. They went through misery and sorrow because of the heartbreaking incident that happened to them. Obviously, the incident wasn't planned and it occurred out of the blue. Let's unfold the story in detail.

The Michael family were constantly visiting the hospital and out of the blue Michael and his wife Luisana Lopilato, an Argentinian actress took a break from their professional life. Surely, the media was raising several questions about their sudden drastic change in life. Why did that happen? 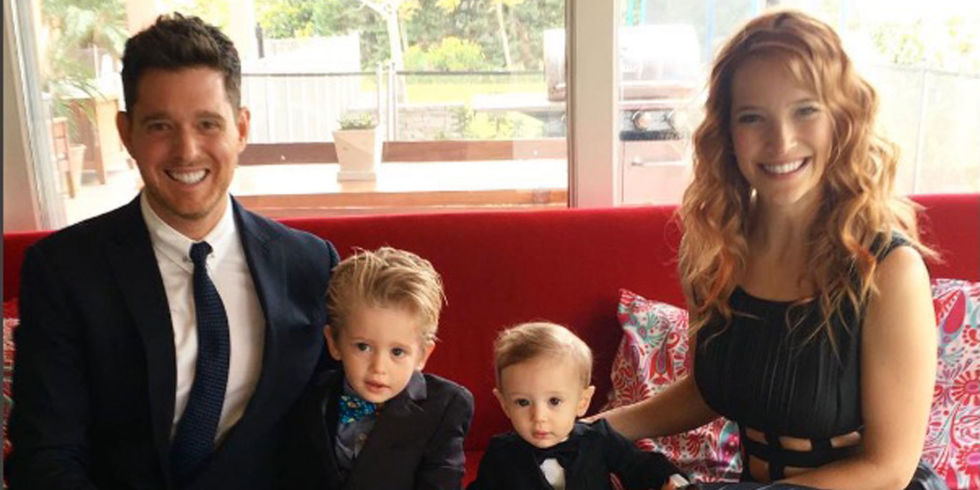 Michael and Luisana with their sons

Finally, in 2017, Luisana Lopilato revealed answers to the questions raised by the media. She stated that the reason for their hospital visit was because their elder son, Noah was diagnosed with liver cancer in November 2016 thus, he was on the constant treatment.

Luisana broke the silence about her son's health at the press conference of her new film Those who love, hate. She emotionally broke out in the interview saying;

"It's difficult for me to speak about this, it's very recent and I'm still a bit sensitive about the subject. But the love is daily, when people stop me in the street. It's wonderful to know that you're accompanied in life and that people love you."

She added, her son's recovery was a very long process and she was struggling to see her son this way. Pretty heartbreaking right?

Let's get into their family story for a bit. The couple tied the knot in 2011 and they have two beautiful sons together; 3-years-old, Noah and 14 months Elias.

Luisana explained in the daily mail that her son is doing fine and there is not much to worry about her son's condition. She expressed these words in the interview;

"Thank God, my son is well," "When things like those that happened to us occur, your take on life changes. Now I value life much more, the now and the today."

Michael Buble with his wife Luisana

She even thanked the people for their support and concern and said the process was made easy knowing that there were millions of well-wishers with them. Luisana with her youngest Noah

The couple said that the situation taught them a lot and they became strong for their son and taught them the value of life and they have learned to appreciate the life even more. Micahel with his son Noah

Michael gave up the offer of hosting this year's BRIT Awards to be with his son Noah and his whole family. A great dad. Who wouldn't want a father like Michael? We bet you agree.

Luisana even took a break from her movie shoot named Those who love, hate so that she could help her son get better soon. Noah is obviously the luckiest kid as he has such lovable parents. They put a hold on their career for the sake of their son. A sacrifice only a parent can make. Luisana with her husband Michael Bublé

The couple gave a statement regarding his cancer recovery. It said,

“We are so grateful to report that our son Noah has been progressing well during his treatment and the doctors are very optimistic about the future for our little boy.

They even expressed their gratitude towards the doctors and the caretakers and for their priceless help.

Grammy-winning singer, Michael told US Weekly in a statement that he is very optimistic about his son's future. That's the way a father should carry himself after the incident. With a positive vibe!

Let's look at how Luisana sends out her appreciation towards Argentina through facebook and Instagram with the heartfelt message;

"Ever since I came to Argentina I keep receiving demonstrations of love that I get to the depths of the heart," she wrote. "I feel blessed and embraced by the amazing energy that I receive through the birthday wishes and the prayers of so many people. Today I want to dedicate a thank you from my heart to each of the people who gave me strength when I needed it most...Thanks for joining me in the pain, thank you for celebrating my happiness, thank you for being a part of my life."

Michael with his elder son Noah

They are truly the nicest people on earth and they deserve good things in life.

Well, we are also very happy for their son's recovery and we pray for their family with good health, and eternal happiness!