The multi-talented Melisa Ann McCarthy normally known as Melissa McCarthy is an American celebrity who has been active as an actress, comedian, writer, fashion designer, and producer. She started her acting career in the late nineties while she became very popular for her role in Gilmore Girls.

Melissa is a married woman who got married to Ben Falcone. It has been more than a decade since she got married and is a mother of two children with whom she is living in Los Angeles.

We are giving you more about her relation with her husband, stay with us.

Melisa McCarthy pursued a career in acting after graduating from St.Francis Academy. During her days in acting, she met her future husband Ben Falcone. Ben Falcone is also an actor, producer, and director of Hollywood whereas he has also written scripts for some films including his own film The Boss.

Melisa and Ben gradually came closer and they started dating in 2003. They remained in their love relation for the next two years. After dating for 2 years and a few months, they decided to give a legal name to their relation and got married on October 8, 2005.

Now, it is more than 13 years since they are in a relation, but there are no rumors of their divorce yet. Amazing. They have a smooth relation till now and there doesn't seem any misunderstanding and dispute between the couple.

Melisa Children with her Husband Ben

The couple had a quality time with each other after their marriage and their happiness doubled when they were blessed with children. The couple gave birth to their first daughter on 5th May 2007 while their second daughter was born on 22nd of March 2010. 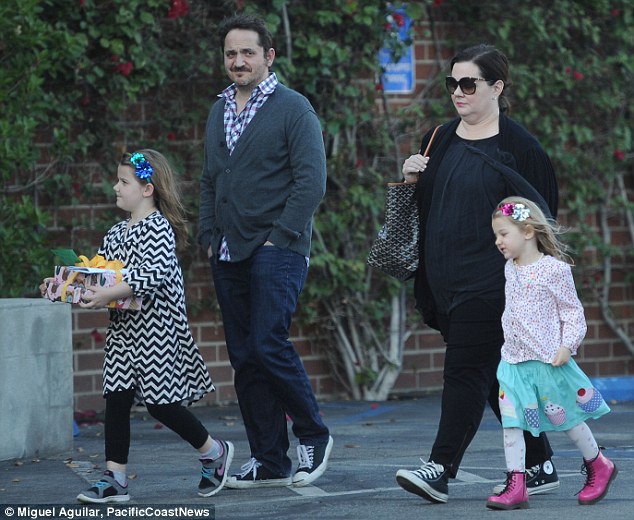 Caption: Melisa McCarthy walking on the street with husband and daughters

Melisa and her husband Ben produced the comedy film The Boss in 2016, where they made the debut of both of their daughters Vivian and Georgette. The debutants were cast as the daughter of McCarthy in the film. Ben Falcone himself directed the film which was released in April 2016.

Video: Trailer of the movie The Boss

Must Read: Meet Melissa McCarthy and husband Ben Falcone's daughters: They are making debut in movie

Melisa McCarthy has worked in several films, short films, and TV movies during her career. She has also played a number of films opposite her real-life husband Ben Falcone.

Some of her films are Go, Charlie's Angels, Disney's The Kid, Pumpkin etc. and has earned a good popularity as well as money from her work in movies.

We hope Melissa continues to entertain her fans with brilliant performances in movies and we wish all the very best for her future.