Meghan Markle Quits Her Lifestyles Website,Focusing on Becoming a Princess

Renowned American actress, Meghan Markle's personal life became a matter of interest after she began dating Prince Harry. As always, Markle has done something odd due to which various assumption started to arose. Markle, who began her career in 2011, is best renowned for her role in 'Suits'. The American actress has started a lifestyle website named "The Tig", but she has recently shared a letter on a blog where she announces quitting the website.

Markle was previously married to Trevor Engelson but they divorce later. After that, she was in an affair with Cory Vitiello but she broke up with him too and now she is dating Prince Harry. It has been confirmed by the prince that they have been dating since November 2016.

The suits actress Meghan launched her own lifestyle blog “The Tig” in 2014.  She got inspired from the name of wine “Tignanello”, which is nicknamed ‘Tig”. She has mentioned in an interview that she has a great love for food, travel fabric, fashion and has always felt an impulse to share them that's why she launched the website to share them with people.

Markle had also hired employees who helped her handle the posts, emails and handle graphic designing. However, she did the photography and writing part by herself. She mostly wrote about travels, foods, beauty, poetry and meditation.

Her website has 141K followers on Instagram. Despite having so much of followers, supports, and love for her website she is quitting from her lifestyle website, the Tig. The lady has posted a letter Friday announcing to stop her this project.

She has written a goodbye note and also posted a thank you to her tig followers on Instagram and has said that she will always be grateful for the support and love gave to her.

Is Meghan Quitting her lifestyle website to become a Princess

We can assume that quitting has something related to Prince Harry. As the couple already has announced their relationship publicly, are the duo planning an engagement or marriage? Or does the lady has some other serious career plan for which she has said goodbye to her website? 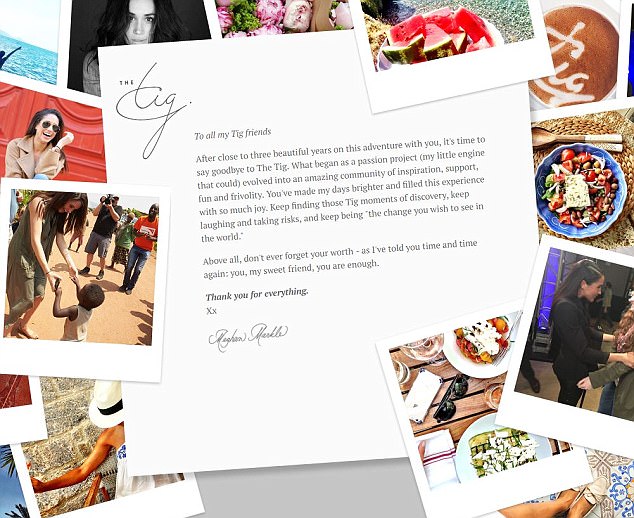 They have been in the relation for nearly a year now and as we have already seen her dressing style changed into more of a Royal and modest attire, we hope Meghan is probably on her way to becoming a Princess. We hope Markle has the plan of settling down with Prince Harry and wish to see her in amazing wedding outfit soon.

Fans are also very eager to know her reason for leaving the website and desperately waiting to see their grand weddings.

We guess the lady won't stop her acting career too and we will be continuously seeing her as an actress in many more series in the future.