Doesn't have to be yours, but whenever their's a break up in between a couple, it obviously saddens you. Doesn't it? Likewise, the separation of one of the highly appreciated couple in Hollywood, Meghan Markle and her now ex-husband, Trevor Engelson put many of the couple's fans in a shock.

The couple dated each other for nearly a decade before walking down the aisle, that's a long time of togetherness. So, why did the couple have to split? Moreover, what's for the couple after they ended their marital relationship.

Let's find it. Just hang on a little longer!!

Meghan Markle and Trevor Engelson were in a long haul affair before they got hitched. They began dating in 2004. The Suits star and Engelson took their relationship slow to get to know each other more. In the wake of dating for a long time, the pair chose to take their love life to the next level and exchanged rings on 2010. Following their engagement, Meghan and Trevor spent a year together before they tied the marital bond and interchanged their vows. The big day came in September 2011 and the two promised to share their lives as a couple. The wedding function took place at the Jamaica Inn Ocho Rios, Jamaica. They didn't need the wedding to be fabulous, so they just had around 100 visitors. I think they believed in love and really didn’t care for a fancy wedding ceremony.

The native of Los Angeles Meghan and husband Trevor lived a happy married life for about 2 years and seemed like their relationship would last longer. 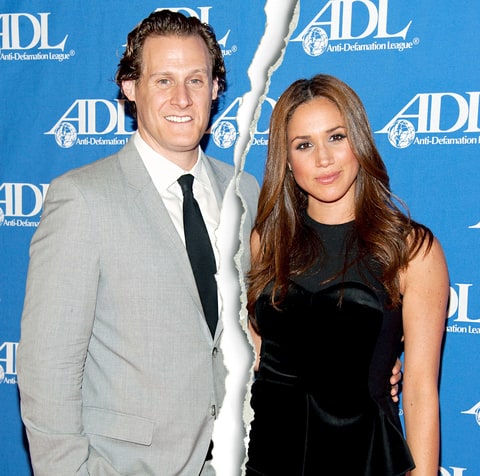 Just like every story has it's ending, their relationship came to a halt in May 2013. Whatever may be the reason for the split was kept between them and was not made public. The couple officially got a divorce in August 2013 and went separate ways.

After the end of a 2year long marriage, Meghan took a break from the dating game and focused on her career. It took a while for her to recover from her divorce after that Meghan was rumored to be dating a celebrity chef Cory Vitiello, but the relationship didn’t last long.

Shortly after her breakup with Cory, she met Prince Harry who happened to be in Toronto for a charity. Meghan was there for her shoot for the famous TV series Suits. Call it coincident or fate the two of them met during that event.

There were rumors that Harry was head over heels when he first laid eyes on Meghan and she also felt the same way. Prince Harry and Meghan exchanged numbers and is said that Harry kept texting her until she agreed to meet him.

The two of them went on few dates and it was enough for them to fall for each other. Meghan since then has posted a lot of photos on her Instagram account hinting that Harry and Meghan are in a relationship. In one of her photo, she is seen wearing the same bracelet as one worn by the Prince.

Another fun whirlwind in #NY - shooting for @bobbibrown & cheering on my #1 @serenawilliams at the #usopen ???? Now it's time to get back to work! @suits_usa here I come! Xx #suits #travel #airport

On Tuesday, November 8, Kensington Palace issued first official confirmation statement which affirmed the pair is in a relationship and are very serious about it. The letter was emphatic and stressed on the abuse Meghan and her family had to experience from the media after the news of their relationship broke out.

It is rare for such statement to be issued which means that Prince Harry is madly in love with Meghan Markle and could be the start of a wonderful relationship. Now, their stop will be wedding ceremony as the couple already got engaged on November 27, 2017.

To know more about Harry and Meghan check: frostsnow.com