Lauren Gregory Welcomes A Baby Girl With Her Husband Thomas Rhett,Know About Their Married Life There is no doubt about the fact that parenthood is one of the most blissful aspects of a person's life. Lauren Gregory and her husband Thomas Rhett just got into it, but their happiness knew no boundary when they got to become a mom and dad back-to-back. Well, if you're thinking about twins, then you are incorrect. Lauren gave birth to her daughter just a few months after the pair adopted a gorgeous child from Uganda.

Lauren and Thomas have come a long way as they are friends since childhood. Even today, their relationship looks as fresh as it was in the beginning. We can't deny the reality that the couple looks like they are more in love than they ever were. Let's find out more about their married life and children:

Lauren Gregory and Thomas Rhett reveal about pregnancy and adoption

When Lauren revealed in February that she was expecting a baby girl all of her fans got excited. Yet, she added some more to the news by revealing that she and her husband are adopting a child from Uganda.

got some sweet photos back today, and I think I'm a little obsessed with our growing family and your photography @juliepaisleyphotography :) thank you so much ??

In an interview with US Weekly, Lauren said:

"Our hearts are exploding with happiness for y'all to meet our new baby who we are bringing home from Africa soon who is also going to have a little brother or sister because, SURPRISE! there's a sweet baby in my belly too."

The couple brought baby girl Willa Gray Akins home in May while Lauren was still pregnant. Now, Willa is already an elder sister as the couple welcomed their second daughter, Ada James, on Sunday. 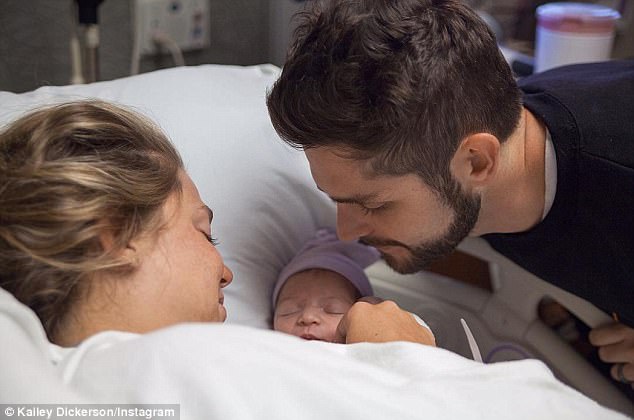 Thomas Rhett and Lauren Gregory with their newly-born

Lauren underwent 36 hours of labor at a hospital in Nashville before she gave birth to her 7lbs 3oz weighing daughter.

Lauren and her husband have been friends since first grade. They began dating when they were only 15 years old but it only lasted for 6 months. Even though they dated other people in between, they eventually found their way to each other.

The loving pair got engaged in December of 2011 after Thomas proposed her at a Nashville restaurant which was Lauren's favorite. Thomas described the incident and said:

“There was a [wine] bottle with a silver Sharpie. I wrote, ‘Marry me?’ on the bottle, and she wrote ‘Well, duh, yes’ on the bottle. Somebody cued 'The Way You Look Tonight' by Frank Sinatra, and we danced in this little cigar room. It was pretty awesome.”

Isn't Thomas Rhett and Lauren Gregory's relationship so inspiring? They have been going strong in their marriage from the beginning and they show no any hints of divorce. We believe that they will go strong with their marriage and daughters forever.

Let's wish them years of happiness to come.