Krystin Lisaius and husband Somchai Lisaius -the married former television couple was found guilty as they risked their baby's life. Krystin was found to have cocaine in her system while she was breastfeeding her four-month-old daughter. The baby, therefore, was ingested the drug that her mother had in her body which made a very harmful effect in the little girl. After the incident, Somchai Lisaius was dismissed by his TV station.

According to The Tucson Weekly, Krystin Lisaius and Somchai Lisaius were subjected for two years in prison starting from October 3. This former TV reporter was made to appear in court in late June and was pleaded guilty to the charge.

After such a dreadful incident the small baby was taken to hospital on May 15. The baby's eyes started rolling into the back of her head after she was injected cocaine through breastfeeding. It was said that the couple refused to allow a blood test on the baby in the hospital. At the end urine tests and toxicology screening done, there was seen cocaine in her system.

Krystin  Lisaius  and husband Somchai Lisaius with their baby

There was an investigation done where Krystin denied of having cocaine but later admitted that she had snorted the drug while hosting a party on May 14. Krystin added that she had no idea that the cocaine she had might have any bad effect on their baby as she breastfed her only after 12 hours she took it.

There also came a confession from Som side that he used the drug every six weeks or so but initially he was denying the fact that he does drugs. Som who was a veteran crime reporter at KOLD-TV station was instantly taken out of the media house after this news of drugs taking and breastfeeding came out. 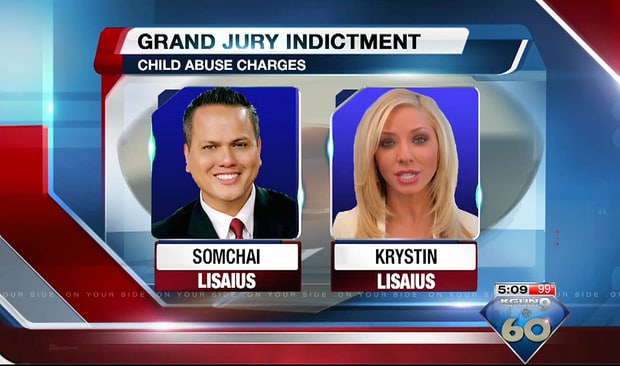 As there was a major investigation done by the American police, after the search done on this couple house more drugs was found. Police found 1.59 grams of cocaine and a scale inside their home. Now this couple hardly has any access to their child as they have sentenced to two years in jail.

Both Krystin Lisaius and husband Somchai Lisaius were brought in the court on three criminal charges which include children abuse, possession of a dangerous drug and drug paraphernalia.

Krystin Lisaius used to be a local reporter in Tucson, Arizona. She has also won the Miss Southern Arizona pageant in 2012. She was currently working as a freelance writer for North Tucson Living Magazine. Krystin has also worked as a television reporter at the local news channel KGUN. She married Somchai Lisaius a crime reporter KOLD News after her graduation. And this couple lives in Ora Valley, a suburb of Tucson.