Kris Jenner's Sister Karen Houghton: All About Her Love Life, Marriage, and Children Some celebrities earn fame out their struggle, while some are lucky enough to be born in such family. Today, we will talk about Karen Houghton, the sister of the reality star Kris Jenner. Karen, who is nicknamed as the crazy aunt was married to her love Mark Zettel. However, she divorced him after 6 years of marriage.

Well, there are many who are interested to know if Karen, after her separation with her husband, is dating anyone. We have answers to all your questions. Further, we will also talk about her married life in the past and her children.

Houghton, who came in the highlights after her 5-hour facelift to look like her sister Kris, got the attention of the media after her divorce. Well, Houghton was in a relationship after splitting with her ex-husband, Mark. The guy is none other than Steven Thornton, but the detail about him is barely available.

Must of the details about Karen's love life is still unrevealed, but it is said that their relationship began in 2011 and ended a year later in 2012. The reason behind their separation is still a mystery.

At present, Karen has kept herself away from the touch of the media. No clear reports regarding her recent dating issues are out yet. Maybe she is in a secret relationship and dating, or maybe she is enjoying her single life and is busy with her daily works.

Who knows, let's wait for the day and let's take a look at Karen's 5-hour facelift video.

Probably, you are curious about her past relationships too, right? Well, Karen seems to be free from the records of her past affairs. Beside her ex-husband Mark, Karen is not reported to have officially dated any guy. Let's know more about her married life with her ex.

59-years-old Karen Houghton has not revealed many details about her married life. However, the couple reportedly got married in 1996 in a private ceremony. Zettel has a few bad police record as he got arrested 16 times for grand theft and use of the prohibited substance.

Houghton divorced Mark Zettel in 2002 ending their 6 years of marriage.The former couple shares a daughter together.

Karen Houghton with her daughter and ex-husband Mark

Many of you might not know, but in 2009, Karen after her divorce settlement was ordered to take protection against Mark due to his threatening and volatile behavior, especially to their daughter, Natalie.

Curious to know more about her daughter? Scroll down.

Natalie, the cousin to the reality stars Kendell and Kylie Jenner, is also a model like her close relatives, Kardashians. The detail about Natalie is not available yet, but reportedly she was born in 1999.

Karen Houghton, who turned down Kim Kardashian's third wedding invitation, has a tense relationship with her family. But, Natalie, 18-years-old, seems to be in good terms with her cousins and their family, unlike her mother.

Many of you might have noticed that Natalie uses her father's surname. The teen model Natalie Zettel, who no less beautiful than Kardashians, often shared her lovely moments with her Kardashian cousins Kim and Khloe Kardashian. Have a look. 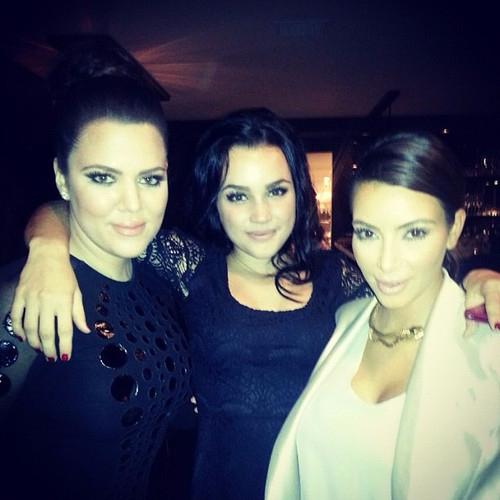 Natalie with Kim and Khloe

Well, unlike her Kardashian cousins, Natalie has not opened up about her love relationships. Maybe she is also in a secret relationship but has kept her personal life off from the spotlight.

In future, maybe the detail will be out, and we promise to update you with the details. Till then let's wish them all the best.