Kim Woo Bin and Shin Min-a’s relationship is the talk of the town in South Korea as they are dating. Yes, you read it right. Kim and Shin have been in a romantic relationship since 2015. The pair not just looks great together but actually share a great chemistry. There are no rumors of a breakup between them.

Let’s find out more about their love affair.

A lot of Kim Woo’s fan must have watched Kim Woo and Shin’s Giordano advertisement, but they might be unaware that Giordano’s shoot was the first encounter of Kim Woo with Shin. The two started dating soon after that.

According to Dispatch, the couple often spends time by going on drives and they catch up multiple times a week. Kim Woo is often spotted picking Shin from her parking garage.

Sidus HQ, Kim Woo Bin's agency also confirmed about Kim Woo’s relationship with Shin as they said that the pair is seeing each and they share good feelings. They also revealed that Kim Woo and Shin got close due to their advertisement shoot together as they developed good feelings after it. 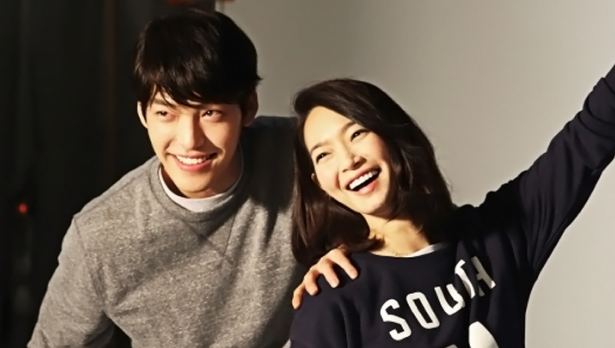 It’s not just Kim Woo’s agency that confirmed about them, but Shin’s agency also pleaded for the media and fan to be good towards Kim Woo and Shin so that they do not have any trouble in their relationship as colleagues and future lovers.

Even though the pair has been dating for more than a year now, they do not show any hint of tying the knot. However, both Kim Woo and Shin have their own perspective on dating and marriage.

During an episode of the KBS talk show ‘Midnight Entertainment’, Shin said that she thinks about marriage and she is more into younger men. She revealed that after she filmed the movie ‘My Love, My Bride’, she realized that marriage could be a thing for her and likes younger men irrelevant to their age.

Shin had said it in Oct 2014 before dating Kim Woo but now she has actually proved that she really is into younger men by dating Kim Woo as he is five years younger than her.

During another episode of the same show, Kim Woo also revealed that he wants to be a husband and a father who is more like a friend as to how his mother was to him.

Best of luck for the couple.

Is Bruna Marquezine still Dating Neymar Jr? Her Past Affairs and Relationships