The well-celebrated South Korean actors Shin Ha-kyun and Kim Go-eun have been in a romantic love relation since the last year. Fans of these stars were stunned when they came to know that the couple was dating for few months which was confirmed by Shin and Kim's agencies in August 2016. However, after Shin's denial interview with Ilgan, it created suspect in the fans about their relation.

Shin is currently at an age of 42 who debuted with the movie The Happenings 1998 and best known for several hit dramas and hit movies, including Brain (2011), Mr. Beck (2011), and Pied Piper (2016). On the other hand, Kim is just of 25 who debuted in 2012 with the movie A Muse and has gained a huge popularity with the TV drama series Cheese in the Trap.

To know more about their love relation, stay with us.

The South Korean movie and drama superstar Shin's affair with a rising drama actress Kim were first confirmed by their agencies HODU&U Entertainment on August 23, 2016. The agency then said that the couple was in a romantic relation for about two months. They also said

They are just starting to get to know each other. They are dating with good intentions, so please cheer them on.

Prior to they started dating, they got closer during their scuba diving training session where they were also able to relate to one another as actors. Despite their busy schedule and a 17 years age gap, they managed their time for their simple meeting and date.  After their relation was confirmed, they were spotted at a restaurant together after which Shin escorted Kim home.

After their relation was confirmed, their old photos started collecting some critics. They were seen sitting next to each other in the VIP premiere of the film The Handmaiden, however, at the time, they were not romantically involved with eachother. 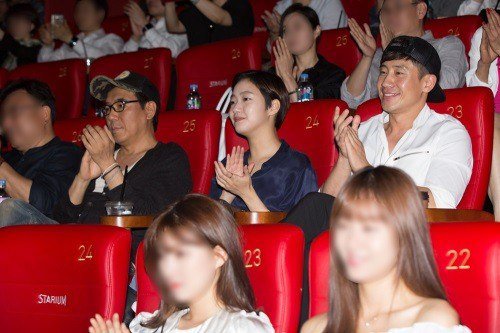 Caption: Shin and Kim sitting alongside in the premiere of film

Shin and Kim were in a relation for about two months, however, he denied the fact in an interview with Ilgan Sports. He was there asked about his current relationship status, where he answered

Currently, I am not dating anyone. I personally don't like the word 'something'. If you like someone, then you do, and if not then you don't. I am not sure of this whole 'something' thing.

Shin and Kim both are from the same profession which has also made them easy to manage their relation. The couple seems very confined to their profession as they were not involved in any kind of love relation before they made it with each other. We hope, The Pied Piper and Cheese in the Trap stars remain in their happy relation and they will get married soon.