Kevin Harlan's Daughter Olivia Harlan Affairs: Who Is She Currently Dating? Her Love Life In Detail Olivia Harlan, best known for her work as a reporter in the college football for ESPN and the SEC Network, is the daughter of the American television and radio sports announcer, Kevin Harlan. Many of us are aware of her professional life, but her love affairs and relationships are still a matter of curiosity for many.

Well, is Olivia, who also served as the traveling sideline reporter for NBA's Atlanta Hawks, dating someone? Is she married? Let's know the details about Olivia's relationship, datings, and past affairs.

Relationship of Olivia Harlan: Who is she Dating?

Olivia, who was not reported of having any boyfriend until December of 2015, currently is in a lovely relationship with her boyfriend. Well, the lucky guy is none other than Los Angeles Clippers' pro-basketballer, Sam Dekker. Though the couple is dating each other for quite a while, they have not revealed exactly when their love affair started. 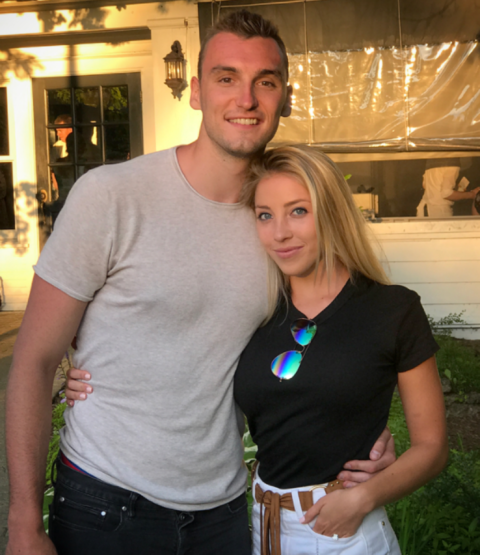 Olivia with her love, Sam

However, as per some sources, the couple was first seen together in the Christmas of 2016. Let's have a close look at the couple.

We're millennials... sooo this is our Christmas card. Sorry bout it! Safe and Happy holidays to all ????

Well, regarding the qualities of her boyfriend, Olivia once told:

I go on dates, and I’m a social person, but the time has been minimal. And when I do have a night off, I don’t want to go on a random date with a guy I’ll probably not like. So I have a great group of girlfriends, I want to see, and that’s usually what I do. I think whoever I date next has to be someone super confident, someone, who’s working toward a goal as hard as I’m working toward mine.

It seems the basketballer Dekker has all the qualities Olivia likes in her boyfriend. The couple's deep love and support can be seen on their Instagram post. Check it out.

Happy Birthday to the one who never ceases to amaze me! Thank you for being you and for all you do for me. I love you and am so proud of you everyday! Enjoy YOUR day, but I hope I can always help make every day feel like Liv Day ????

#tbt sitting court side messing with @samdek7 Love how he tries to look busy and too cool. I know better though... Proud of his first real season playing. The night he broke his hand, he started, and was the only Rocket to play every game of the season. (His goal was 82 after missing his rookie season with back surgery). Please keep a speedy recovery for him in your prayers, so he can get back later in the playoffs!

Well, when it is about couple's past relationships, both seem to be free from the affairs in the past. The duo without the mishaps and conflicts in their relationship have taken their love to a new level after their engagement. Let's know details.

Olivia and Sam Dekker got engaged on May 26, 2017, nearly after a year of dating. The engagement news was announced the following day after Sam proposed Olivia, his to-be-wife.

The couple was spending their holiday in Wisconsin, where Sam popped the question on one of the nights and with a great yes, they decided to take their relationship further. Have a look.

I've been stupid in love with this guy since day 1. he asked me to be his wife last night?? that means I can cry from laughing and poke his dimple forever. I thank God everyday for bringing me this perfect man

The couple, however, has not fixed the date of their marriage. Maybe they are busy in their life.

Hope they will soon announce the news of their marriage too.

Till then, let's wish them best and stay tuned for more updates!