Frostsnow https://frostsnow.com/
Home Gossip Kelly Rowland And Her Husband Tim Weatherspoon Has A Child Together: How's Their Married Life?

Kelly Rowland And Her Husband Tim Weatherspoon Has A Child Together: How's Their Married Life?

Kelly Rowland, born as Kelendria Trene Rowland is an American singer. The 36-year-old is also a songwriter, actress, and a television personality. She started her professional singing career by joining the famous girl's group Destiny's Child in which her best-friend Beyoncé was already a member. Her first solo album "Simply Deep" released in 2002. The same year, she also started acting. She made her acting debut through a recurring role Carly in a sitcom, The Hughleys. Kelly also has a star carved with her name on the Hollywood Walk of Fame.

Kelly sure has a fascinating life. Every minor and major event of her personal and professional life make headlines in the tabloids. Let's talk about her married life with her husband and child.

Kelly Rowland and Tim Weatherspoon got married on May 9, 2014. The two started dating in 2011 and by the third date, the former Destiny's Child knew Tim was the one. Talking about her initial dates with Tim, Kelly once said,

He said he knew by the first date. I knew [by] the third date. I was like, ‘Oh my God!’ I got nervous to be completely honest, because I was like, ‘This feels like my husband.’”

Tim had proposed the coach of The Voice Australia during a late night call in Skype when she was in Bulgaria. Kelly announced her engagement with Tim on December 16, 2013. On The Queen Latifah Show, she quoted Beyonce, she said: “He put a ring on it,” a ring worth about $100,000 to be exact. The ring was cushion-cut with a halo surrounding the center stone. 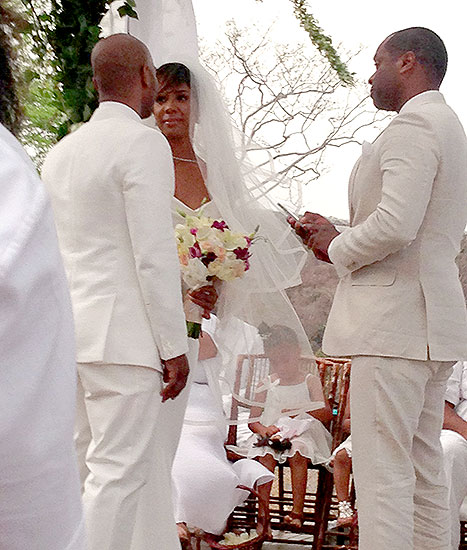 The couple then got married in a Costa Rica in May 2014. It was a destination wedding.The ceremony took place in a small cliffside overlooking the ocean. The event was a very intimate one, only some of their closest friends and family members attended the wedding. The few guest on the list included Destiny Child's fellow bandmates Michelle Williams, Solange, Tina Knowles, and Beyonce. The beautiful white bridal dress with long white veil and couture gowns of the bridesmaids were designed by Michael Costello. The bridegroom was wearing an all-white suit on the day he said "I do" to his love.

Prior to marriage with Tim, the steamy performance of Kelly and Trey Songz at the 2011 BET Awards heated up the rumors of two stars being in a romantic relationship. But the relation was just a platonic one. Kelly and Tim have been married for almost 4-years and at present, they both are head over heels in love with each other. There is no sign of two getting a divorce.

Kelly Rowland, mother of one: Who Is her Child?

The X Factor judge is a mother of a son named Titan Jewell Weatherspoon. He was born on November 4, 2014. On June 10, 2014, Kelly had revealed her pregnancy by posting a sweet adorable photo of two pairs of Nike Air Jordans, one pair belonging to her husband and the other pair fit for a baby in her Instagram. Kelly announcement of expecting a child

Despite being a mother of the 4-year old, the singer turned actress does not look like one. She certainly loves her hot sexy body and has maintained it very well.

Following the footsteps of the talented mother the little child has grown interested in music. He is said to be good at playing the piano. He must have inherited his musical skills from his superstar mother. The kid is exclusively close to other offsprings of the Destiny Child's members. Titan and Blue Ivy, Beyonce's daughter act like they are cousins. Kelly posing for a photoshoot with her son and husband

Even though the 36-year-old mother is no expert in motherhood, she sure takes pleasure in looking after her son. She says, “My favorite part about motherhood is watching the world through their eyes”.