Frostsnow https://frostsnow.com/
Home Gossip Jo Church is together with Liz Carr despite her medical condition; An unusual marriage

Jo Church is together with Liz Carr despite her medical condition; An unusual marriage

An unusual marriage! It is about a couple whose wedding was known as one of the most exciting weddings. Also named wheelie special, it was the wedding of Jo Church and her husband or wife, well, her life partner, Liz Carr.

First, let’s know about them, Liz Carr is a comedian and actor who uses a wheelchair and is completely frank about her life as a disabled person. She even uses it for her comedy. Let’s not forget about her partner Jo church; she is an author.

Despite Liz Carr’s medical condition, Jo Church and Carr are together. But the rather than husband and wife, the couple is preferred as spouses as they are both female and the legal term for this is Civil Partnership.

Well, Liz Carr uses a wheelchair since the age of seven due to arthrogryposis multiplex congenital, though Carr is not away from experiencing love relationship.

The couple with secrecy in dating detail got married in the year 2010 or shall we say they became Civil Partner. The date of their wedding was on the Mexican Day of the Dead festival.

ALSO SEE: What does Stephen Hawking's Eldest son Robert Hawking do for a Living? His Career and Net Worth

It is said that those who are dead returns to the party with the living. They planned for that day because a lot of their disabled friends and their family were dead and they wanted them to attend the party. 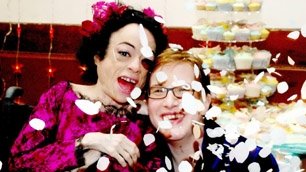 The theme of the wedding was a “Dia de Los Muertos.” As Carr explains,

Our two bridesmen wheeled side by side down the aisle to the lyrics, 'Here come the girls...' and escorted by our moms, myself and Jo followed behind to the Angry Anderson classic Suddenly - the wedding song of Scott and Charlene in Neighbours.

And so the ceremony began.

Well, even after these years of marriage, the duos are still together and going well, despite the critical health condition of Liz Carr. As for a fact, they have not shared any children either be it surrogation or adoption.

The British actress, who studied law at Nottingham University was diagnosed with Arthrogryposis Multiplex Congenita (AMC), a rare disease in newborns resulting in decreased flexibility of the joints, at the age of seven. Then after four years, she was told, the wheelchair would be with her for the rest of her life.

A person, who got sick at an early age has been able to earn a lot of fame. She is not the first person who has made a name despite the disability. We all know Stephen Hawking, the late greatest mind in the globe in a wheelchair.

Carr is a woman of multiple talents. She is not just a comedian but also an actress. She has appeared in many shows on television like Sunday Morning Live, Too Much TV, The Crime Thriller Club, and Newsnight.

Along with that she also worked as a researcher for the BBC’s panel show and British television comedy series, Have I Got News for You and also joined a crime thriller series Silent Witness as Clarissa Mullery.

A woman with such talent, Liz has turned her disability into strength and has proved disability is another name for differently able.

Well, the person with extremely talent despite being in the wheelchair probably is the inspiration to all, but not everyone's considers respect to an idol.

As reported, back in August 2017, Liz Carr and her personal assistants became the victims of an attack by a man armed with scissors. The situation got wore after Liz was stabbed on her head, however, as of 2018, Liz is fine and doing well.

The attacker was soon after arrested and was detained under the Mental Health Act.

Surely not everyone likes sweet, isn't it? We wish Liz best for further.