Jessica Harris aka J Lynne is a Philly-born Model who is now in the limelight as Scott Disick's girlfriend. Scott and Jessica were recently spotted getting cozy with each other which is creating lots of buzzes. Jessica was once a real estate agent for Post Brother Apartments in Philadelphia and also has worked in Underwear Seller BEME in New York City as Senior Project Manager.

Scott is a successful American businessman, TV personality and ex-boyfriend of Kourtney Kardashian. Scott dated Kourtney for more than fifteen years and the couple gave birth to three beautiful children.

Recently, a few days back, Scott was seen kissing with Jessica in Miami where Jessica was wearing a tiny thong swimsuit. Want to know more about hot Jessica and Scott? And what about Scott's ex-partner Kourtney?

A few months ago, it seemed Scott Disick was doing everything he could do and patch things up with his ex-girlfriend, Kourtney. But now, Scott is seen getting up close and personal with brunette beauty Jessica Harris. 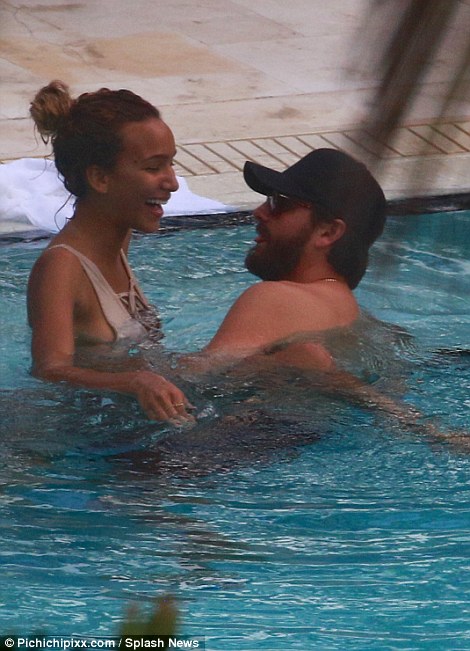 Scott left his house and family in Costa Rica and shifted to Miami to get close with Jessica. The couple was spotted together shortly after his getaway to Costa Rica with the Kardashian clan.

Jessica looked fabulous in the pool in a cream lace swimsuit flaunting her sexy figure and Scott in a black baseball hat and sunglasses. The couple spent their quality time in a pool of luxurious Setai Hotel.

The couple has not confirmed their love relationship yet, but their closeness and intimacy provide everybody clear indication of their dating life.

Scott and his ex-girlfriend Kourtney Kardashian

Scott and his ex-partner Kourtney first met through their mutual friend Joe Francis back in 2006 at his house party in Mexico. The couple did not get married but gave birth to three children. The couple's first son, Mason Dash Disick was born on 14th December 2009 and the birth was filmed and aired on Keeping Up with the Kardashians.

Problems between Scott and Kourtney rose shortly after Scott's alcohol problem at around 2010. They reconciled after some time and their second child, daughter Penelope Scotland Disick was born on July 8, 2012. Their third child, son Reign Aston Disick was born on December 14, 2014.

I love them so so much ???? @khloekardashian @ScottDisick pic.twitter.com/2N26Lncm9B

Scott and Kourtney had on and off relationship but the couple's official split was announced by E! on 6 July 2015.

Must Read: Abbey Wilson and boyfriend Joe Francis soon to be wife and husband as they could get married soon

Must Read: Having divorced once, Joe Francis unlikely to repeat the blunder with soon-to-be wife Abbey Wilson