Having celebrity crush is super common. Everyone wishes to spend a moment or two with celeb-crush but what if we tell you, a fan followed his celebrity in social media for years to make her crush fall for her. Well, nothing is impossible in the modern world. Surprisingly, such a dream came true for Danielle Caesar as she got her dream boy after being a fan for five long years.

Danielle is the fan of the Disney star Jake T. Austin and has been showering her crush on the actor for five years. Jake is the American actor excessively famous on the role as Max Russo in Wizard of Waverly Place.

Danielle is the normal New York girl who now got popularity after being linked with famous actor Jake. Let's hear out the details and who knows if you are one of like Danielle to have your dream come true. You might wish to learn how Danielle got the hot Disney star right?

Who would have thought of a fan girl being connected with the Hollywood star? No one did, and now it came as a surprise to all that a normal girl has bagged her Disney heartthrob.

The 22 years old Danielle is a college student and a native of New York. She became obsessed with Jake in 2009 and she started following him on Twitter. She suddenly started posting, complimenting, following on social media as well as events where he appears since then. Luckily, she got to meet him in 2011 at Planet Hollywood.

Her unconditional love tweets for five years succeeded on melting Jake's heart. Well, it definitely was not easy as it sounds. She did try her best to get him though. Let's look at her tweets she has posted for her beau Jake back in time while she was just a fan!

She really bombarded Jake with her uncountable tweets over the years. Then her dream came true when she met him at Planet Hollywood in 2011 and got a photo with him where she captioned “your smile is so cute @jaketaustin.” 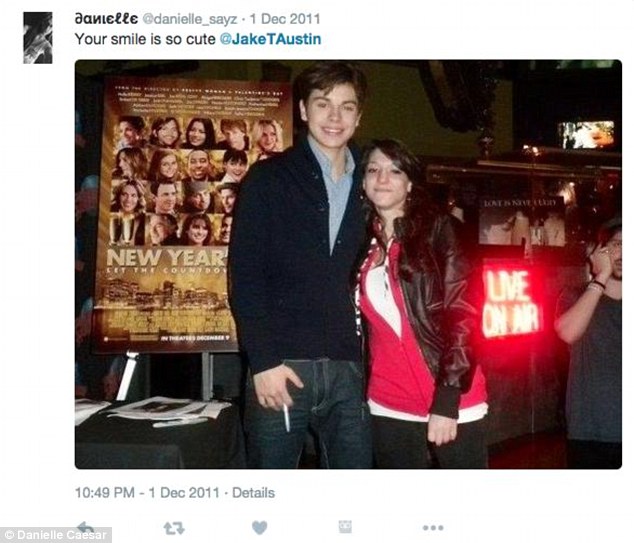 Danielle Caeser first met the star Jake T. Austin in Planet Hollywood, New York, and got a photo with him back in 2011

On a happy note, The Fosters actor Jake began following her on twitter on the next day and Danielle definitely was on the moon at that time. Four years later in 2015, they are now a couple.

Now, let's also hear the story from Jake's side. How he manage to fall for Danielle? 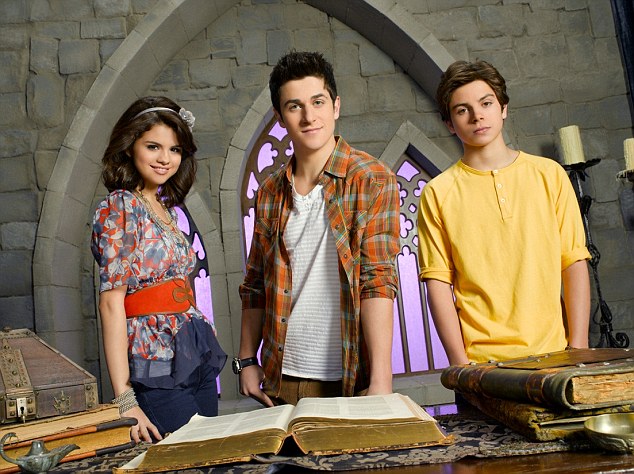 Jake, right, who is famous for his role as Max Russo in Disney’s Wizard of Waverly Place alongside best friend Selena Gomez, left, and David Henrie, center

Jake confirms his relation with her long-time fan Danielle and he shared a loved-up snap on Instagram to prove his affair. The picture has him and his girl locking lips with the caption 'I'm crazy for her.' Well, his 1.3 million followers were swept off by surprise after seeing it. 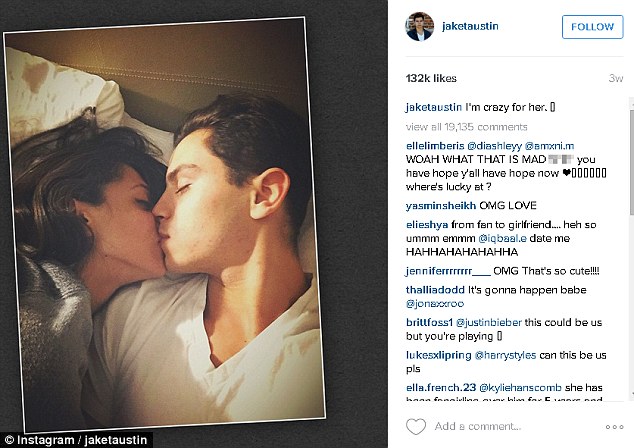 Jake T. Austin shared a snap of him and his girlfriend Danielle kissing with the caption: 'I'm crazy for her'

On the other hand, Danielle posted on her Instagram which she has now made private had said 'Every love story is beautiful, but ours is my favorite.' on the caption.

Danielle rose to fame on the social media after she began dating her Disney heartthrob Jake. She has now earned more than 140,000 followers on her Instagram.

The girls on her Instagram couldn't hold it in and tweeted back at the incident saying,'She has been tweeting him for five years straight because she was a fangirl and she made it! She is his gf OMG!', another added: '@harrystyles please can this be us?'.

“It doesn’t matter how you meet someone – on set, in a coffee shop, at school or in the business. Sometimes you connect with people at the right moment and you just click.”

Such a cutie! It's not that if he is an actor he should be dating from his profession. Love is not always when you do. Sometimes love finds you itself. Danielle fell in love since 2009, met him in 2011 and got followed by Jake in the next day. Now here they are! Totally in love! 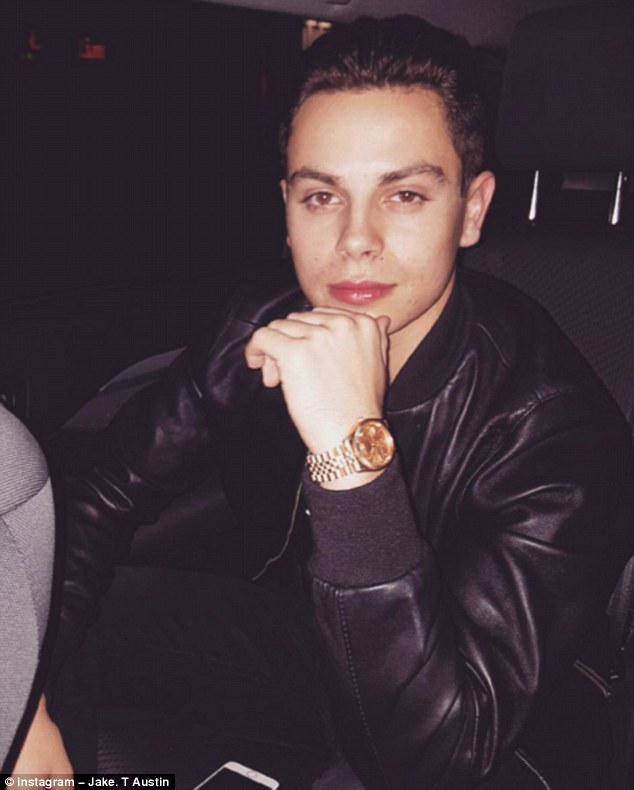 Jake T. Austin, in 2015 confirms his relationship with his biggest fan Danielle Caeser

This is quite an amazing fairy tale love story. Congratulations to both love birds Danielle and Jake. We wish you all the happiness!