Isaiah Mustafa engaged to Girlfriend Lisa Mitchell? Know about their Affairs and Relationship

Do you remember the dark and hot ‘Old Spice Guy’ who motivates men to ‘smell like a man, man’? It is Isaiah Mustafa who isn’t just talented in compelling men to buy a product but is also skillful in planning a surprise proposal and getting down on one knee like a real man. Yes, Mustafa did the same thing to his girlfriend, Lisa Mitchell in December 2016.

Former NFL wide receiver Mustafa has been in a relationship with his partner for a long time. Now that they are engaged, we believe that they are going to get married pretty soon. Let’s find out more about Mustafa’s affair and children:

Mustafa gained a lot of popularity when he got featured in the series of Old Spite TV advertisement. He is also renowned as Luke Garroway from the series ‘Shadow Hunters’.

We can’t deny the fact that Mustafa won the heart of many ladies with his charming face and seductive physique. However, little less did the girls knew that Garroway’s heart would be taken away by Mitchell.

Garroway popped the big question to Mitchell during their trip to New Zealand during the Christmas Eve. He captured the whole moment with the help of a drone and posted the video on his Twitter and Instagram. 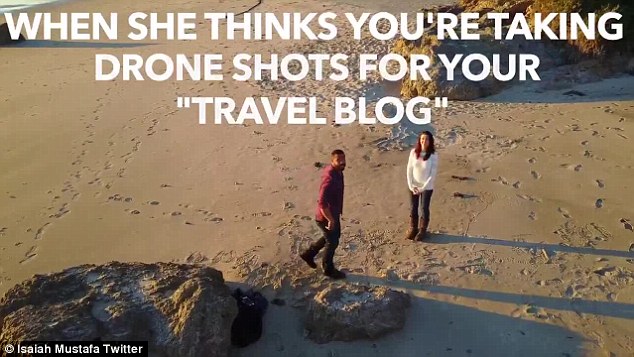 Garroway took Mitchell to Queenstown Beach, but Mitchell had no idea about what Mitchell was going to do. Garroway can be heard narrating the video saying, “When she thinks you’re taking drone shots for your ‘travel blog,’ but you propose.”

When the 43-year-old actor bent on his one knee and proposed her, she was totally surprised. That was when she hugged and kissed him and said ‘Yes.'

Isaiah Mustafa is a father already

Mitchell is not only the woman Garroway was in a relationship with. Even though there are no tracks of Garroway’s past affairs, he was previously married to a lady from which he has a daughter.  He often posts photos and videos with his teenaged daughter. Have a look at it by yourself:

At #USASpirit with Hq. #tbt

Although Mitchell and Garroway have been engaged only for few months, there has appeared no slight issues in their relationship. It seems like Garroway and his fiancé shares a great bond of understanding and love between them.

Considering how well they get along one another, we don’t believe that they will split ever. We wish to see Garroway exchanging vows with his partner Mitchell really soon.