Is 30 Years Brenda Song again in a relationship with Trace Cyrus? Know their affair Brenda Song is an American actress, model, and spokesperson. She started her career as a child fashion model at an early age in show business. She is best known for her roles in TV shows Fudge and 100 Deeds for Eddie McDowd.

Brenda Song in addition, to her brilliant career on the line, also has grabbed people's attention with her charismatic beauty too. There is no denying she has had a long list of boyfriends in her life. Well, among all the people she dated, her affair with an American singer Trace Cyrus who is a brother of the famous Hollywood star Miley Cyrus is the most talked.

Aren't you all curious to know the love story of this stunning couple. We will take you on the pair's journey here in Frostsnow!

The on-and-off relationship of celebrity couple Brenda and Trace Cyrus is somewhat like a tumultuous relationship between Selena Gomez and Justin Beiber.

Trace Dempsey Cyrus is an American musician. The son of country singer Billy Ray Cyrus and brother of recording artist Miley Cyrus, he is the backing vocalist and lead guitarist for the band Metro Station. 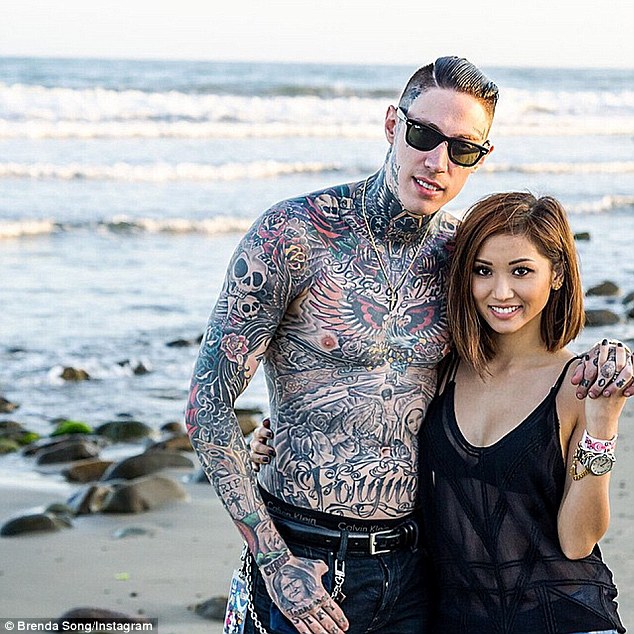 The couple was first rumored to be dating in 2010, but the exact detail of their first encounter has not been exposed.

Although, the couple finally went public with their relationship in May 2010 at Nylon Magazine's Young Hollywood Party.

Also Read: Is Trace Cyrus angry with Brenda Song? Are they dating?

Brenda and Trace got an engagement

Brenda and Trace's romance indeed sparked like a wildfire, and it didn't take a long time for them to make their affair official.

Soon after one year of love, they decided to get engaged in October 2011. The press even spotted Brenda with an engagement ring in public. Here is the picture!

Brenda Song and Trace Cyrus got engaged in 2011

Trace's sister and an American singer Miley even showed her joy through Twitter about her brother's engagement with Brenda!

@TraceCyrus can't wait for Brenda to be a Cyrus :) couldn't be more excited about my "sister in law to be" yay :)

It was all going well like a fairy tale until one news dropped like a bomb to their relation. Their even were pregnancy rumors back then, which were later denied by the singer herself in 2015. 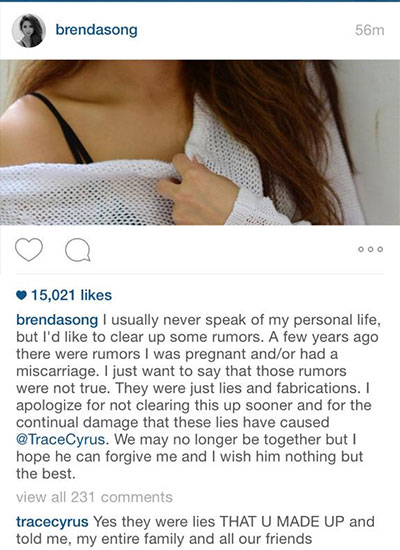 Brenda Song wrote on Instagram about the pregnancy rumors

Also Read: Selena Gomez and Vanessa Hudgens, faces swapped as they are scared of the results.

One false rumor was enough to shatter Brenda and Trace's love life.

Brenda came up with a false report that she was pregnant which caused a major dramatic situation in their relationship which led to the separation of the couple in June 2012.

None of them spoke anything until Brenda's mom denied the claims to Star magazine saying;

It’s very upsetting to our family because of what I’m going through (cancer treatments) and it’s not how we raised her.

Brenda and I have decided to go our separate ways,

But the story does not end here.

Brenda and Trace got back together in New Year

The lovebirds got back together in January 2013 while they posted their reunion photo on social media.

The picture was captioned as "Happy New Year!!! Make 2013 the best year of your life!"

A few days later Trace again posted a photo with Brenda with a caption “I wanna tell the world about u so that they can get jealous.”

After a while, a tension seemed in their relation, and they again split up in 2013.

Brenda and Trace broke up for the second time

The reason has not been confirmed yet, but we are sure their affair took a bumpy road. Trace posted a harsh tweet in April 2013. Check it out!

Now it's just a flashback, come back, cause I want you bad.

In the same month, Trace got in a new love affair with his high school girlfriend, Melissa Marie.

The couple patched up again in 2013

The newsroom confirmed about the couple's reunion after they were spotted in a movie theater together. Let's see what Brenda has to say about their second reunion;

"Don't give up on someone you can't go a full day without thinking about.."

It seems like they are together now and keeping their relationship in the shade this time. As both of them has not yet officially announced but we constantly find signs of their possible affair. Here is one of them!

Brenda was spotted with an engagement ring in 2013

Seemed like the couple got re-engaged after she was caught wearing Trace's engagement ring in August 2013.

In November 2014, Trace posted Brenda's picture with a major throwback.

The couple had even bought a house together after their engagement in January 2012. Trace told to PEOPLE;

"We have our first house together,"

"We have four dogs, so it's nice to have a house with all our dogs."

Check out the couple's video when they were spotted together outside a hotel!

From all the signs it seemed like the couple could be romantically involved and they are just keeping it a secret from the world. Would love if the story turns the expected way, but well, life's not a fairy tale. Though the couple kept on with their on-and-off relationshp for quite long, if reports to be believed the pair is longer dating and have split.