The NBC game show Deal or No Deal host and Judge of America's Got Talent since 2010 Howie Mandel is a renowned comedian. He is married to Terry Mandel. The pair have been together for a very long time but, the love between them hasn’t been any less.

Let’s find out more about Howie and his wife, and children. Further, we will also talk about their married life and affairs in detail. Having been married since 1980, what keeps them bonded so pretty well to this date. Just stay with us for the details.

America's Got Talent judge alongside Mel B, Simon Cowell, and Heidi Klum, Howie Mandel met his wife Terry when they were in high school. They dated for a while and soon changed their love affair into a beautiful marriage. The pair tied the knot in 1980. During an interview, Howie revealed that he knew he wanted to marry Terry when she made him laugh as for him spending life with a woman with a good sense of humor was a perfect idea.

Howie and Terry also seem to be romantic as for seven nights a week are date nights. Howie admitted that his wife doesn’t cook, so they eat out every night. Thus, every night feels like a date night for him.

Video: Howie Mandel gifted an elephant to his wife on her birthday

The power couple’s relationship is pretty amazing even at present as there are no hints of divorce between them. The couple is also out of any questions of having an extramarital affair with anyone. 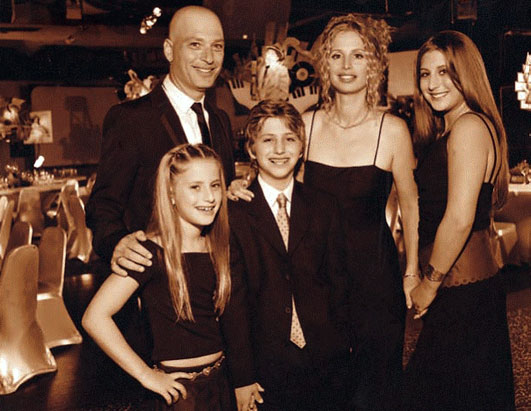 Howie has also been an inspiring dad as he always taught his children not to value life with money or fame. According to Howie, if you are passionate about something and you feel funny doing it, then you’ve made it.

That’s how Howie says that he got lucky. For Howie, what he does for the living and what he looks forward are the same.

Howie Mandel’s eldest daughter Jackie, whose full name is Jackelyn, got married to Alex Shultz in July 2013. The pair got married at the Hotel Bel-Air in Los Angeles on a fine Saturday evening.

Howie’s daughter is a teacher by profession, and his son-in-law is a DJ. At present, Howie is a grandfather to Jacklyn's adorable daughter.

It has already been 38 years of Howie and his wife’s marital togetherness. Howie feels very fortunate to have met his wife years ago as she is a beautiful inside-out.

Howie revealed the secret of his long-lasting relationship by saying that being away from home has strengthened his relationship with his wife. He says:

I’m lucky because she puts up with me. If you ask her why our marriage has survived all these years, she’ll tell you it’s because of the 200 live stand-up gigs I still perform every year.

Howie reveals that he is thrilled whenever he gets the opportunity to come back home. Isn't that a sweet gesture from Howie. He is a great husband and a great dad as well.

How long have been Howie Mandel and Terry Mandel married for?

Howie Mandel is married to Terry Mandel for 38 years.

How many kids do Howie Mandel and Terry Mandel have?

He has three children with Terry and two adopted children.

What do you guys think about Howie Mandel and Terry Mandel’s relationship? Please, leave a comment and visit frostsnow.