Frostsnow https://frostsnow.com/
Home Gossip How Much is Stephen Merchant's Net Worth? Detail About His Salary, Career, and Awards

How Much is Stephen Merchant's Net Worth? Detail About His Salary, Career, and Awards Stephen James Merchant is an actor, comedian, director, writer, and radio presenter based in England. He is best recognized as the co-writer of The Office, a British sitcom under the collaboration with Ricky Gervais and Karl Pilkington. Moreover, as an actor, he has appeared in numerous TV shows like The Big Bang Theory alongside the lead cast of the show, Mayim Bialik, Jim Parsons and many others.

Born on 24th November 1974, the 43-year-old was born in Hanhan Avon, England. During his days as a student, he also worked as a film reviewer and it marked his career in broadcasting. He has a 2:1 Bachelor degree in Film and Literature.

Stephen is also a comedian. He performed stand-up comedy at Bristol's Comedy Box. His experience as a comedian was not very good as he mentioned that he did a stunning job during the first week, but later, he had a very hard time performing as a comedian.

As a radio presenter, he worked at XFM 104.9 for seven years. He worked for BBC too, and the show he co-wrote, The Office, aired on BBC. However, the show could not acquire good rating. Later the show was also aired in the American version.

No, @thetimesmagazine, I am NOT worth £40million quid (nowhere near) and I am NOT playing a superhero (he's a giant albino mutant). FAKE NEWS!! (Although I would like an OBE)

Later in 2007, he started hosting a radio show called The Steve Show on BBC 6 Music which ended in 2009. Moving back to his roots, comedy, he went on a nationwide tour in the UK as a standup comedian. He has also gone on a tour in Australia and New Zealand in late 2012.

Meanwhile, talking about his acting career, he made his debut as an actor in 1999 in TV series Comedy Lab. As on the big screen, he first appeared as Peter Ian Staker in 2007's Hot Fuzz. Moreover, he has made many other guest appearances in TV shows like Comedy Bang! Bang!, The Big Bang Theory.

Moreover, back in 2016, he also voiced a character in popular TV series The Simpsons. In the episode titled 'The Girl Code,' he voiced a animated character created by Lisa Simpsons called Conrad.

Taking a closer look at his most recent works, he appeared in 3 movies in 2017 namely Logan, Table 19 and Beauty and the Beast. Moreover, he is also currently working on his new film Fighting with My Family, both as a director and actor. The movie will release in 2018.

Till date, Stephen has won 15 awards which include 3 BAFTA Awards, 4 British Comedy Awards, an Emmy Award and many others.

How much is Stephen Merchant's Net worth?

The estimated net worth of actor, comedian and radio presenter Stephen Merchant is £25 million (approximately $35 million).

No, thetimesmagazine, I am NOT worth £40million quid (nowhere near) and I am NOT playing a… https://t.co/frKWeZRhji

Talking about his real estate, he currently resides in a mansion located in LA, California. The house was previously owned by comedian and TV personality Ellen DeGeneres. According to Variety, he bought the house for a massive $10 million. The house features a gorgeous scene of the city and a swimming pool. Moreover, he also owns another house in London. 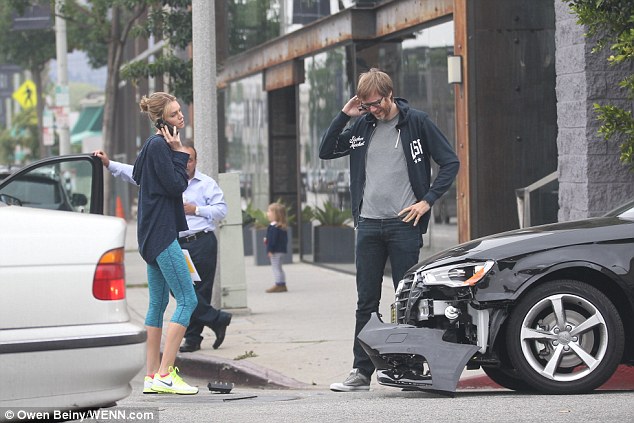 There are not many details about which car the actor drives but back in 2015, he got into a minor car accident where he crashed his car, which seems to be an Audi, in LA.